You are using an outdated browser. This site may not function properly with it. For a better experience, please upgrade to a modern browser here.
HQGE
Trades 641
View Profit Chart
Blog Post
Watchlist
Video

Learning valuable lessons this week about promoted stocks, and holding and hoping. Breaking rule #1, cut losses quickly, but it has caused a chain of events that have helped me develop as a trader. It forced me to research the SEC filings (or lack thereof, which I should have done anyway BEFORE entering the trades). It helped me to understand that I am trying to size up too quickly (my emotions are being affected by the trades I'm in), and it is forcing me to study more on risk/reward. It is helping me to understand that there should NEVER be a "what-if" once you hit your risk level...just cut it and move on. If there's a what-if, you're position size is too large, just get out of the trade and move on to the next opportunity. With that being said, I've accepted that I made a huge mistake, and I'm along for the ride just to teach myself a lesson and further understand how twisted stock promoters are. I'm "hoping" (Tim would probably knock my head off if he were standing next to me), that $HQGE and $LTNC will retest some of the highs so I can exit near break even. I continue to watch them being promoted, and I guess I'm just waiting to find out where exactly the promotions stand, but it looks to me like it's the end game and I'm holding a losing hand (because I didn't CUT LOSSES QUICKLY). 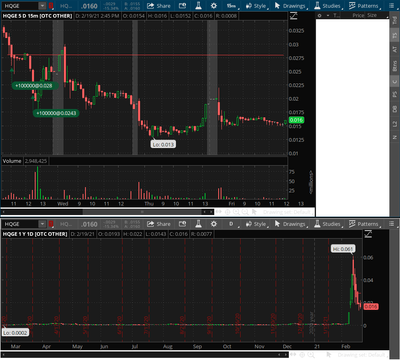 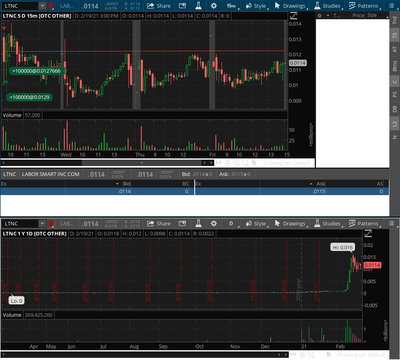