You are using an outdated browser. This site may not function properly with it. For a better experience, please upgrade to a modern browser here.
WTW
Trades 2,749
View Profit Chart
Blog Post
Watchlist
Video

Had the time to watch $WTW into the close on 20170301 after my successful morning trade: https://profit.ly/1MtRN6 Noted there was support at $18 but didn't want to play because I though it weak. Tim alerted that he made an entry at 1) (on picture) and sold at 2) after he hit his targets - see his trade: https://profit.ly/1MtRKh Later in chat he comments that people were asking him why he thought it a good buy to which his reply was that soon after open the price went past the P/M high and subsequently never went below the blue line. 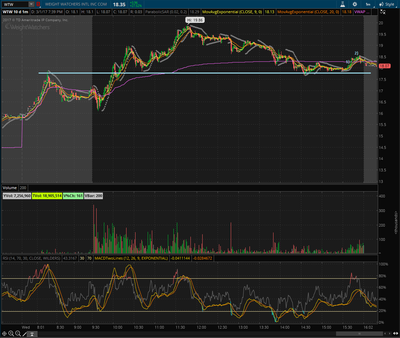