Week 3 of silver subscription (The journey of millions)

First, a bit about myself.

Im a 20 year old university student who has loved the concept of making money all my life, I was introduced to trading at about 16 when my dad first mentioned it to me and wanted to see if I would be interested and I got hooked from there, Then over time I was gradually drawn to Tim Sykes and was hooked immediately after some time of saving money to be able to afford the silver subscription and enough to open my first international trading account I finally got enough to begin, And thats where I was a few weeks ago, with a pretty good understanding of technical and fundamental analysis i thought i'd be ready to try and really knuckle down.

After seeing Tim's trade on GRPN (Groupon) I decided to have a look at it myself and see what I thought (Only my amateur opinion) As you can see by the chart below i think it could be forming a slight ascending triangle in which it gets narrow enough it could break out above the previous high. I also see a pattern forming in which each morning it seems to gap down a few points before bouncing and going positive on the day and then slowly fading during the afternoon, this pattern has happened three days in a row and could possibly do this again tomorrow after the holiday. Although the volume has been decreasing over each day so it could also break below the support at $4.55. 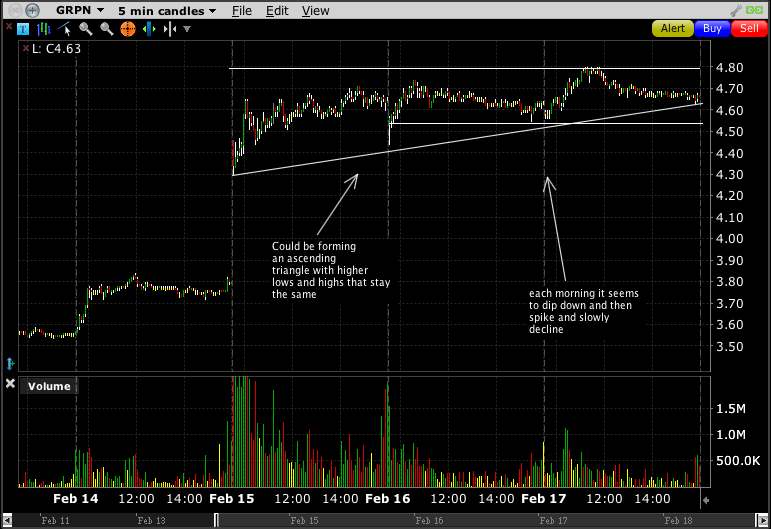 GSIT (GSI Technologies) is the one that caught my eye when tim was talking about it, mainly because it is the first day of the move which could mean that it has more room to move which is a good thing. Another thing that i liked about this chart is that although it has had a massive move it still held its gains all day and also closed near the high of the day (7.06) the move on friday has much greater volume than the normal average volume which is also a good sign. I believe the catalyst for this stock is the announcement that they are presenting one of their patented technologies at an energy workshop, in which the airforce is also included in this announcement which could lead people to believe that a contract to be made with the airforce about their new piece of technology, And as Tim said in his video earlier today, this stock was compared to Nvidia on social media which is a $107 a share company. I believe that if this stock dips down to around the secondary support of 6.90 and holds then it could be a good possible buying opportunity in which it could then increase and possible test the resistance at 7.06. Or even if it breaks the secondary support, if it can then hold the lower support of 6.65 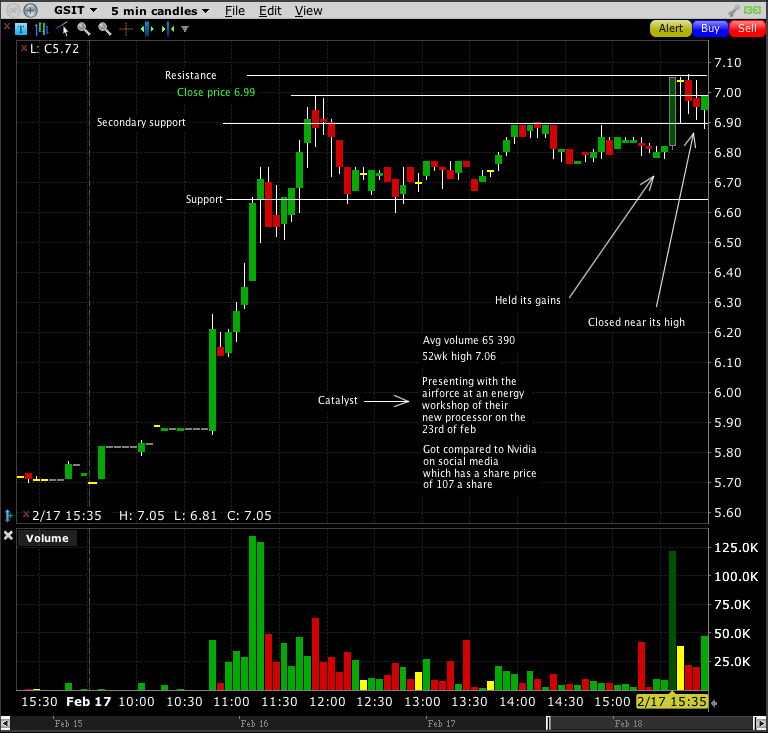 Thanks for giving this a read and seeing my thoughts on these two stocks for the next trading day. I would much appreciate it if any of you reading could give me any feed back and their opinions that would be greatly appreciated.

Watch GRPN similarities on the yearly chart back in July 2016. That can run couple days.

@Yultrader wow its actually very similar, I didn't even notice that, thanks for that!