An incredible lesson on basics

If you ever come across this post then I hope it will serve as a key lesson for you as it did for me.

I started trading just under 2 years ago and the build up to this lesson started a few weeks back when I began engaging with Tim's dad Joel who has helped me instil discipline and accountability in my trading and furthermore helped me grasp what Tim teaches us all the time about K.I.S.S (keep it simple stupid). Yes it can be easier said than done and hopefully this will give you a little perspective on always having your basics down before risking on any trade.

To give you an idea where I was mentally a few weeks back and maybe its something you'll relate to, but I was all over the place, looking at just about every ticker that was moving and trying to find a trade that matched "ANY" pattern I thought I knew. Well lets just say that you may have success from time to time on a pattern that you "may understand" but its not consistent and if you think you know every pattern in the book and can trade it to a T well then what the hell are you doing here??

Truth is if you chase everything then you more than likely to end up with nothing, which will certainly drive you to desperately taking trades that don't fit what you know and more than likely just bleed your account till you decide to make a change or worse, throw in the towel due to your own lack of discipline and studying.

First of all, I only trade OTC First Green Day plays and OTC Multi-day breakouts which is where my discipline has really taken over and has kept me focused on what I know rather than what I think I know which is where Joel really got me focused and I encourage you to becoming successful on one pattern before moving to the next, and if it doesn't work for you then move on until you find the one that suits your criteria, in fact you will know when it is the one for you.

However based on the above one would think I actually lost big on this trade but that is very far from the truth, in fact I made around 10% after being up roughly 30% but why when I was up so much did I not get out and secondly why did I get out when the chart was still intact? Well a winning trade does not always have to be a good trade but rather look at your trades as lessons.

If you haven't noticed by now you will see that Tim gives a full review on every trade he makes which helps students and even himself understand what went right and what went wrong which is why he always refers to reviewing ones trades which mind you is just as important as rule #1 of cutting losses quickly. 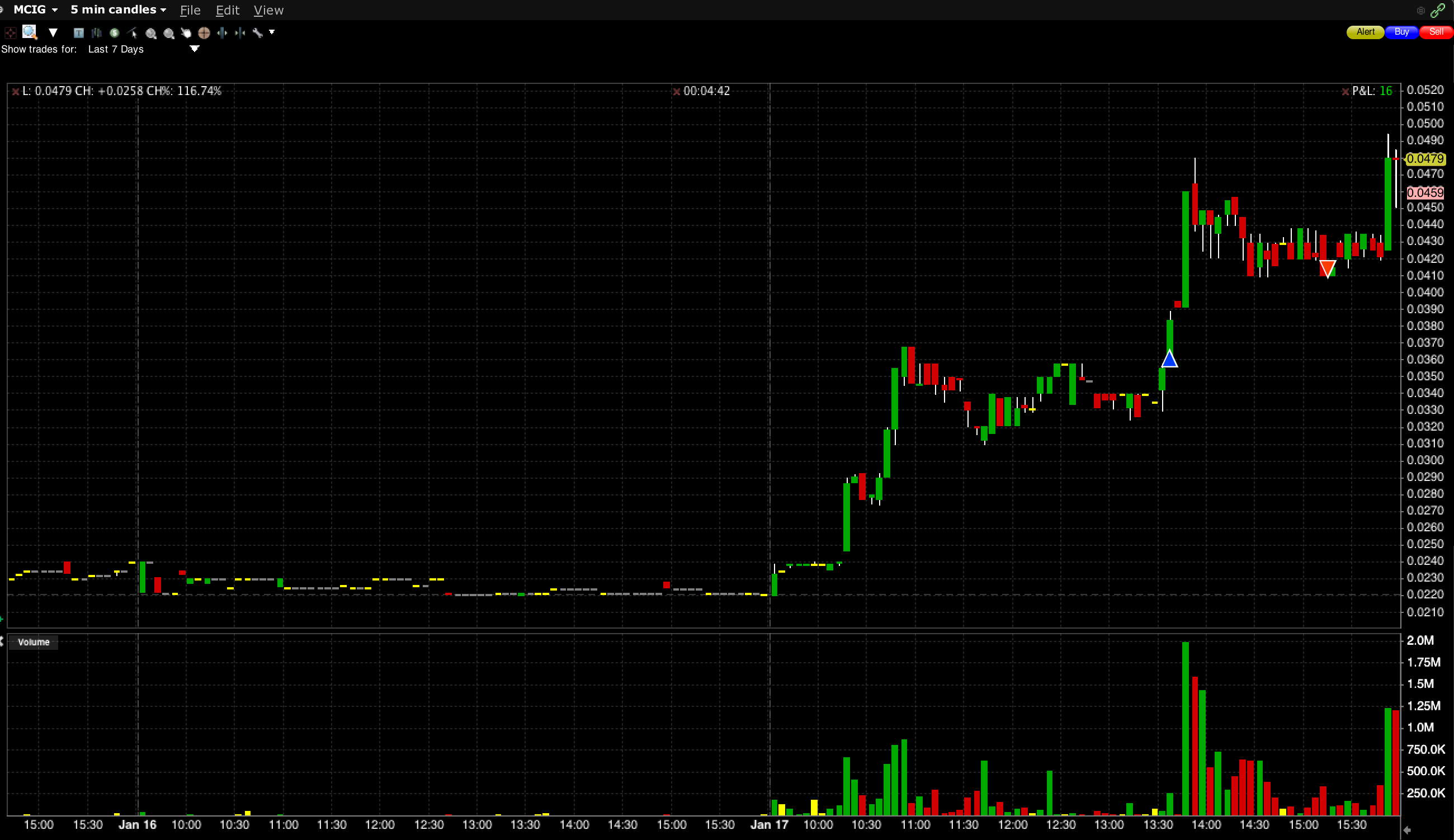 Well lets look at what I did wrong -

#1 - ALWAYS TRADE WITH A PLAN. I understood all the elements of the trade, and it fitted every aspect of a First Green Day including the point where I entered the trade at 0.0365 BUT the only thing I did wrong on the trade was not create an exit plan or an I.F.T.T.T (if this then that) I like to call it. So when the stock spiked to 0.048 why did I not take profits? SIMPLE, I had no exit strategy of getting out with a 10-20% gain as Tim ALWAYS points out in every trade we see him take. Only after the stock came back down and tested the new level of support did I decide on the exit plan and when it came back down the second time to test that level I decided to get out the trade because I became emotional to the profits and lost focus of how a first green day plays out which is usually a run into the close and that is exactly what the stock did. If my plan was to take 15-20% gains I would have gotten out into strength as we are always taught to take singles as this adds up over time. Adding to this had my goal been to swing this trade over night I would have remained calm understanding the chart is still in tact and had the opportunity to lock in gains at the end of the day. Point is I had an entry plan but lacked the vision of an exit plan which is a key basic to any trade we take.

What I did right -

#2 - TRADE LIKE A SNIPER. If I was graded out of 10 then I would have given myself an 11 as my entire focus on the day turned to this one play due to it matching my criteria. There were other big % gainers but nothing fitted my criteria as this one did so it became my focus and if I missed other plays due to this then so be it. My key was remaining focused on this one specific play like a sniper would on his target waiting to take the shot. The only way this was possible was by remaining disciplined and focused on the pattern/s you have learnt and understand 100% and for me that is OTC First Green Day plays and OTC Multi-day breakouts.

I realised that the simple basics of focusing on a specific pattern with a 100% thought out trade plan must become a rule in the principles of your trading and not just a "I'll figure that out when I'm in the trade" scenario. In addition, focusing on the right plays will yield better success overall and will help you become a consistent trader.

Although this was not a loosing trade it was a lesson that I will always remember in my trading career that I can reflect back on and will help me control future emotions and ensure that there will always be rules when entering a trade.

Thank you for your reflections on this journey. I have heard wonderful things about Mr. Sykes helping this community. The phrase that helps me is "plan your trade - trade with the plan." Thank you again.

This is great, making a trading plan still eludes me. I know what they are for I just don't have the knowledge or understanding yet on, if I find a ticker tonight and decide what the support and resistance levels are, look at different chart times 6 mos, 1 yr, 5 yr, 10 yr. Know it has a history of spiking, charts not too choppy, then what? Thank you for sharing.

Reading this a second time with more education trading is making more sense. I'm getting the chart understanding, much better at a watchlist and what to look for in a stock, I think about a plan but I seem to do better one piece at a time. I will get it, an entry dip buy, 2pm vwap, end of day for o/n, I understand now,(not 100%) I get having a % you'd like to make r/r, Just have to start putting it all together. Keep up the good work.