YGYI has a been a ticker on my radar for awhile as it has had recent CBD news and is part of the hot weed sector hype with some recent PR. I noticed it has been trading with some nice volatility the last week and had recently been creeping up.

I will now attempt to go over my exact mindset/ideas/perspective on my plays from beginning to end.

While analyzing long term chart we saw a multi-year break out, this is solid criteria for large moves.

Now I will be going over the more important details which gave me further confidence in the set up:

I am a symmetric triangle guy, I absolutely love them. 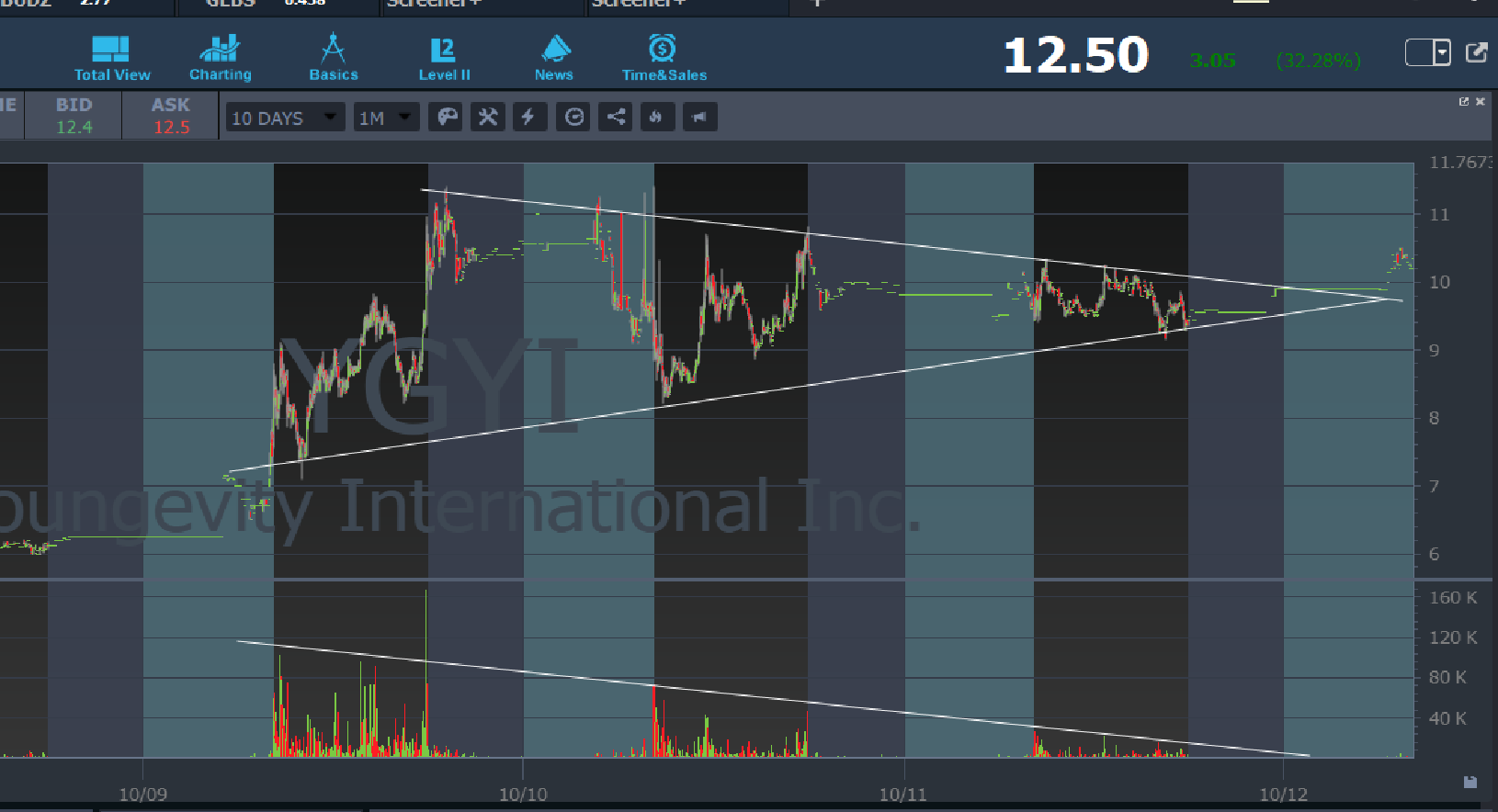 As soon as I saw how perfect the triangle development on the multi-day chart was, I knew the upside was there. Perfect descending volume trend + symmetric TA = preparing for a break out.

Pre-market I noticed it was already gapping up over $10 which is great foreshadowing of how the day will go - don't take pre market lightly as it can provide a view into the future of which way the ticker wants to go - take it with a grain of salt as it is a small detail, but many small details add up to create an edge in the market.

Now I will be going over some approaches to trading this based on a trader's personal style.

I thought about taking the dip buy approach, I had planned on buying around the 9.80 level which seemed to make sense seeing as it had touched 10.50 pre market and 9.80 was a multi-day major support level and considerable pull back. However I am not a dip buyer, it scares me a lot and I am not great at getting fills/recognizing the bottom.

In the morning it did indeed dip and test major support, the lowest it got to was 9.83 with some very low volume - it was possible to scoop shares there but I prefer to wait for the support to hold before I look for an entry.

Saw it hold support felt it was about to trend change volume surge for the break out. Jumped in 10.09 on prints on the ask. I believe right after I got in some large asks came in and I realized I had most likely miss timed my entry, to protect myself I immediately cut my position at 10.03, it bottomed at 9.95 and could have panic dumped even lower but a large buyer scooped up the resistance that made me sell in the first place and it jumped to 10.20, then for the next 10 minutes had a mini fade and actually hit 9.95 again with very low volume. Then there were 2 mins of no prints and it just sat there holding the overall support. This indicated to me people were no longer willing to sell shares in this price zone of 9.80-10. The asks were sitting around 10.05 and I once again saw a fresh volume surge pumping through the asks and that's when it clicked in my head that it's time to take another shot at this. I jumped in again at 10.12 and finally got the break out I had been anticipating.

Details: my first trade I did nail a volume surge trend change but it just wasn't ready yet for the big break out, my sell was a bit jumpy but I would have played it exactly the same if I could go back in time, when trends fail they can fail hard and I wasn't trying to hold and hope a sell off wouldn't happen. I took a $30 loss on that to protect myself. My 2nd entry was another trend change volume surge, I saw that support had held and the market was not willing to sell - this allowed me to take the re entry on the next volume surge which led to the true break out.

Bottom line is trading is not an exact science - it is trial and error. I don't mind taking small losses on miscalculations if I can eventually nail it. There was a lot of factors in this YGYI play that were spread over multiple days, and time frames. Analyze the factors involved, gather information, make some trading plans, plot your TA, execute your trade ideas.

It happened to me before as well very well described and love the conclusion- "I don't mind taking small losses on miscalculations if I can eventually nail it. "