View Trades
This user has no followers.

2 trading session after I bought, and stopped out of, $KBLB, it hits my goals. I didn't buy it yesterday though because the $SPY, $IWM, and $QQQ were all down >2% and 3/4 stocks follow the overall market. It's nice to be on the right track though.

KBLB (5/3/19) Bullish indicators: -Former supernova -4/17 Contract win (double quote) - Multi-year b/o - Multi-year vol b/o -Gap up this morning Bearish indicators: -Already up 300% from pre-catalyst price -Potential multi-year double-top @ 0.264 (former supernova) Trade description: This stock came up on my radar a couple weeks ago when it was up 100%+ on this contract win catalyst: https://finance.yahoo.com/news/polartec-kraig-biocraft-laboratories-bring-130000302.html. It was very hype-y for their new spider silk. "The potential to surpass the current generation of high performance fibers", “Our partnership with Kraig has the potential to be as revolutionary as when we created the first performance fabrics made from post-consumer recycled plastics in 1993." The market proved that it liked this catalyst because of the multi-year vol b/o and supernova behaviour. Yesterday, the stock put in a new multi-year high at $0.25. I figured if the stock could b/o on large volume, it could go much higher. The morning of my trade, the stock gapped up. The $SPY, $QQQ, and $IWM indecies were all up big too. As soon as I saw the large 1M buyer push the stock to new multi-year highs, I set my buy to the maximum in my plan ($0.255). I didn't want to chase the b/o because I knew there was going to be resistance at the all-time high (former supernova high) of $.0264, so I didn't want to be too close to that level when entering. The stock got up to $0.26 on the b/o and then started to retrace a little. I held my entry price until it was finally triggered a couple minutes after the b/o. The stock came back down after my entry to cross back into the multi-year high b/o it had broken but then bounced back. The volume was quite strong for this b/o but could have been much more consistent. It topped out at the double-top high of the previous supernova. I wanted to see if it could test it again and possibly b/o, but it just couldn't. There was no real strong volume. Since the stock cracked back underneath the multi-year high b/o (but kept above my original stop level), I raised my stop loss level from 0.244 to the bottom of the retracement. If it made a lower low than that, I was going to get out instead of waiting for it to cross my original risk. This was a good call on my part. I set a MKT stop loss order because this stock trades OTC and I didn't want to have to chase weakness with LMT orders. As soon as my stop was triggered, the stock dropped down below my original risk level before I was actually executed. I was executed at the very bottom of this dip. A could seconds after the dip, the stock jumped back up to a reasonable spot to stop out. Those market makers got me good. What did I do well on? -I did well on not chasing the b/o, waiting for it to come back to me. I also did a good job of adjusting my stop loss level to conform with the price action. -I realized the risk of the double-top and planned accordingly. What mistakes were made? -I used a MKT STP order which caused me to get executed at a terrible price. -After reviewing this catalyst, it's not even a ""perfect"" contract win. The two companies are just joining forces to create this exclusive spider silk product. Trade stats: https://profit.ly/1Mwegy 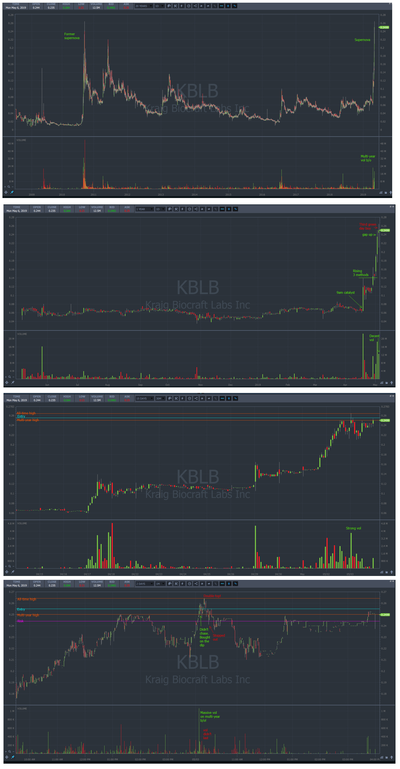 EDXC (4/23/19) Factors that influenced the price: -Former runner -Current supernova -4/3-now All-time b/o -First red day was yesterday -All-time vol b/o today -CBD play (host sector) Trade Description: I've been watching this CBD stock for a couple weeks now. It's been a crazy supernova going up from the 0.04s to the 0.6s. I was tempted to buy b/o in the past, but there has been no earnings or contract release yet. Yesterday, the stock had a huge first red day after it's multi-month supernova run-up, so I was looking to buy the morning panic dip today. We had a massive morning panic. 45% down by 10:05am. I planned my entry for a bounce off of 0.4. When it first started panicing, it came down to 0.45 and started bouncing, so I was tempted to jump in, but I didn't. It came down to 0.405 and then started to uptrend, so I set my limit order. I didn't get filled right away, but it came down back to within my limit order after a few minutes. 2 minutes later, support broke of 0.4 and I watched level 2 meticulously waiting for the bid to snap on 0.395. As soon as it did, I was out. It was a good exit. I had another entry planned for 0.3 panic bounce, so I waited for that. The highest I was willing to put my limit order on the bounce was 0.315. It paniced all the way down to 0.314 (where it had only one tick). I could have gotten in at that moment, but it didn't fit my pattern of waiting for the bounce to actually start before getting in. If I had gotten in at that point and held to the peak, it could have been a 112% winner. But I would never have held that long anyways. What did you do well on? -I did well on controlling my emotions to enter the trade. I never traded the stock when it didn't fit my setup patterns even though it was a supernova consistently breaking out. I waited for the first red day and the following morning panic before trading the stock. I didn't enter the trade when it started bouncing from its panic above my planned entry levels. -I cut losses quickly -I am happy with the nicely played trade, even though it didn't result in profits.

The three indices I follow were all up 0.35-0.7% this morning while I was watching the market. Since it's a Friday, I was anticipating a nice rally this morning. None of my setups were perfect today though, so I played things well and didn't force anything. Now I'm off to the dentist!

Even though I'm loving every second of this journey I'm on, I have to take this week off from trading. The family is in town so I'm taking advantage of the opportunity to visit with them. I'm still studying every single night, but I don't have enough time to visit with the family, finish up my university semester, study the current market, and trade all at once. Besides, what good is success in trading if you don't have close relationships with your family to share it with?