Today is Friday, the last day of my worst trading week ever. So it seems like a good time to pause and write this blogpost for myself as a sort of trading journal that can help me take a step back and evaluate what is happening. If anyone else is reading this, then I hope it also helps you in some way.

I began trading on June 4th, 2020 with a new mindset, new goals, and only $460 in my account after I blew up about $2,000 that I had put in the previous year. My mission was quite simple: only dip buy into panics and aim to make 10%. This worked surprisingly well and I managed to make some very nice returns that added up over the coming days and weeks. It was nice to see how the same trades I was doing to make $46 were making me about $300 towards the end of the 7 week period. This also meant that less of my trading profits were being eaten up by commissions.

But with this new found success came a little bit of over-trading and my winning percentage dropped from 79% to about 65%. I had adopted some other strategies like the OTC FGD pattern, which was working pretty well, but I also speculated a little more and would try to predict ramps and breakouts. Overall I was still doing pretty good. There was a week where I flat-lined a little bit and was worried that my strategy wasn't working anymore because I didn't see many good plays. But I was smart about it and didn't trade as much; and if I did, I did so with smaller positions and I also traded more conservatively. But after that week things went back to normal and I continued banking day after day.

My biggest day was the day CYDY crashed on June 30th. I was fully prepared for it and I banked about $715 that day, increasing my account by 49%! But towards the end of July I was getting comfortable pulling in between $200 and $500 consistently. This was huge considering that just a few weeks before, I was happy to be making between $40 and $100 on the day.

The last week of July the market changed drastically. There were no more great morning panics and the stocks that did morning panic would not bounce back in the same manner as they did before. They would actually have about 3 panics and then bounce back over the course of an hour in a very choppy fashion. I was used to locking in some nice gains within 2-10 minutes and was not comfortable with this new price action. I tried to be patient a few times but the multiple panics stopped me out for losses. So even though I knew that the market had changed and I knew that I had to adapt, it wasn't as easy as I thought it would be.

Tuesday was my first big red day, loosing about $573. This was due to 2 very unlucky trades where the stock just plummeted past my mental stops in less than a second and I ended up taking much bigger losses than I had expected. But because of these losses I think my mindset was out of focus. I still tried to focus on good setups and not force trades to try to make my money back, but I was obviously in pain and I could have justified anything. Couple this with many missed trades that I didn't take out of fear, and a changing market, and I had a recipe for the worst week ever. I got frustrated and started trying to play everything, even setups that were't my bread and butter. I fund that all the trades I didn't pull the trigger on turned out to be huge winners and the ones I did take turned out to be complete duds. Little by little my losses kept growing and I became more and more frustrated and desperate. I started to realize that I was trading the same way I had traded the year before... too much and random setups. I kept telling myself to scale back and not trade as much, but apparently I managed to ignore myself. Unlike the slow week where I flat-lined and scaled back, I was still swinging full force and falling harder each time.

Then I had my biggest loss ever, $522 in one trade. Keep in mind that by this point my average loss was only about $50, so this was a big deal. Granted, this loss should have actually been a small gain but turned into a crippling loss thanks to my broker, but I should not have put myself in that position to start with. I was buying PRPO as it was spiking hard after they announced the commercial launch of a Coronavirus antibody test. I bought 200 shares at $7 just before a halt to the upside. My plan was to sell into the gap up and spike after the stock resumed trading, but the gap up was weak and started turning around. Because I know how fast these stocks move I had my sell limit order at $6 just in case it blew past $7. I sent my order while the stock was around $7.08 after it got rejected rather quickly by $8. My broker, instead of executing my order, gave me an error message saying that the sell order was too aggressive as it was 10% bellow the current price. So while I was trying to figure out why I didn't get executed, the stock plummeted and got halted to the downside. I was watching every 5 minutes waiting for the stock to resume trading so I could put in a market order and just be done with it. But when the stock still did not resume on the 3rd 5 minute mark, I jumped to Twitter to see if I could find any info on resumption time. While I was on Twitter, the stock resumed trading at a random time of 17 minutes after the halt and I was unaware. A few minutes later I saw it tanking even more and I just cut my losses.

From here on out my trading just got worse. I wouldn't take small 5% gains in hopes to make as much money as possible and I let the gains I had turn into losses instead. My trading setups became more random and I ended up loosing a lot more frequently. All in all, this week I ended up loosing $1,430, and I did not have a single green day. The following screen shot shows the drastic difference between the past 2 months and the past week: 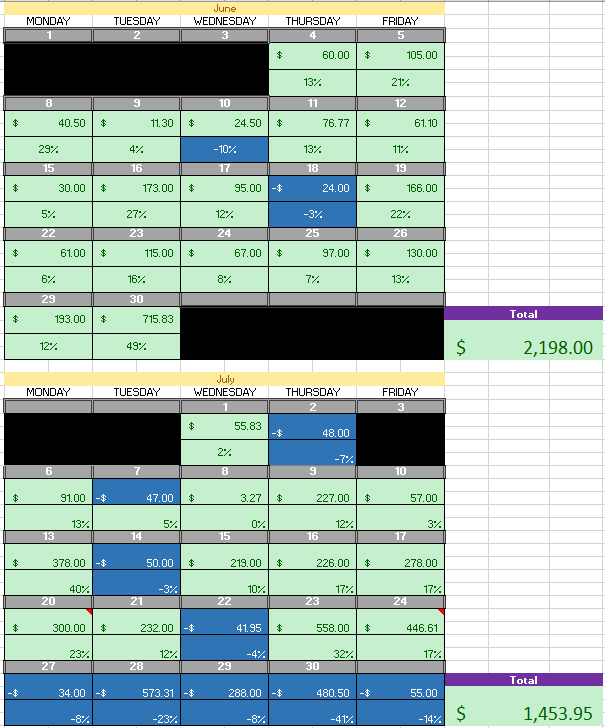 It's crazy to think what unraveled from 2 unlucky trades coupled with a changing market environment. It was like those first 2 unlucky trades knocked me out and I was left dizzy trying to navigate through a moving market, no wonder I stumbled so many times. But it's a good wake-up call to stop moving and take a break to recover from the hits. I will sit on my hands and watch the market, wait for it all to get back into focus and take my shot when I see a perfect setup. I will also trade with smaller positions and aim to make 5-10% to start with. I know that gaining my confidence back is a huge first step that I must take, and I will do so by focusing on winning rate and winning percentage rather than dollar amount. Once I get back into my groove and figure out what is working in this new market, I will size up again and make my money back naturally without forcing anything.

Until then, I need to preserve my account and mental capital and look at the big picture. This is a marathon and not a sprint. This is only my second month since I became consistently profitable and therefore it is only a minor setback in my journey. I'm actually kind of glad that this happened now and not later down the road with bigger money and probably bigger ego. What's funny is I already knew all of this before hand but I guess I just had to experience it for myself to realize the importance of scaling back in a changing market, and especially after big losses.

Overall, even though I gave back half of my monthly gains, I'm still up about $1,450 on the month. And I'm up $3,760 since I started in June with $460, or an 817% gain, so I think I can get back on track if I go back to trading like a sniper. Hopefully this post serves as a reminder next time I find myself in a similar situation, and I also hope it helps you see the possibilities but also the downfalls if you put your guard down. Until next time!

thank you for sharing, that can help us learn from those experiences