Just 30 permanent residents live on Foula, which lays claim to being Britain's most remote inhabited island and operates on a different calendar to the rest of the UK.

I learned several new words during my time in Shetland, the distant island chain drifting between Scotland and Norway. One of them was equinoctial. It means "of or relating to the equinox". It is frequently used to describe equinoctial gales, which can feel relentless this far north when the seasons change in spring and autumn. In a place as exposed to the elements as Shetland, they can be definitive; on its most distant island of Foula, they can act as a sort of gatekeeper.

"Things are likely to get pretty entertaining," said pilot Marshall Wishart as we boarded his BN-2B Islander to fly from the airport outside Shetland's largest town, Lerwick, to the airstrip on Foula, 31 miles west. Our departure had already been delayed by the gales for many hours and for a time the forecast said that no flying would be possible for several days. Instead, however, half-an-hours' notice was given to scramble to the airport and make a narrow weather window.

In a year dominated by domestic travel, Foula has perhaps been the most extreme option available to Brits. Sometimes referred to as Ultima Thule – Latin bywords for extremely remote destinations – it is said to be the most remote inhabited British island, reached by an unpredictable ferry or the frequently hectic 17-minute flight from the Shetland Mainland. Travel due west beyond it and there is nothing but the tumultuous North Atlantic until the east coast of Greenland.

On the day I flew, the equinoctial gales were strong enough to decapitate any white horses forming below. By that point in early October, the island's ferry hadn't sailed for a couple of weeks and wasn't expected to try again for several more. This meant that the 30 or so permanent residents on the island depended wholly on the vagaries of light aircraft to bring them supplies. "It could be like this until the next equinox really," said Sheila Gear, Foula resident of almost 60 years. "It's only really late April or May that the wind finally stops. You have to be well-stocked, but you're used to it if you live here." 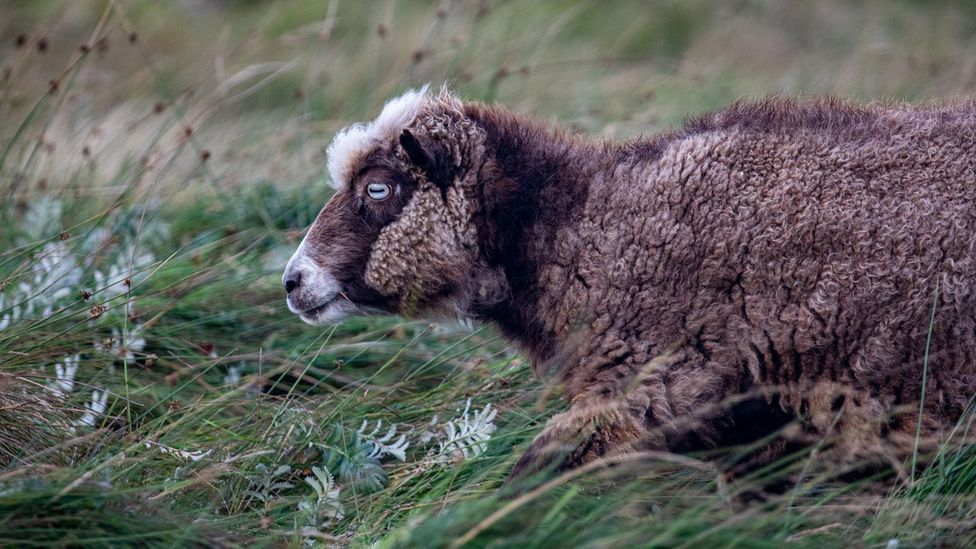 Nonetheless, there is a limited amount of tourism, with just two guest houses – The Burns and Ristie – and a few camping sites providing accommodation. The majority of visitors are birders, drawn here by the tens of thousands of birds that make this blustery island home over summer. Otherwise, Foula offers few distractions for those not interested in the outdoors: there is no wi-fi, no pubs or bars, not even a shop to buy basic supplies. Visitors must bring everything with them.

To some people this is a surprise, but it is not the only one on Foula. Before making the long journey north, I asked some Shetlander friends what to expect. Not only had none of them been before, but they also didn't even know anyone who had.

You may also be interested in:
• A British beast rarer than the panda
• The UK village that lost its cheese
• A small Scottish isle with a big story

If outsiders know anything at all about the island it is likely to be that the residents still adhere to a version of the Julian calendar, having refused to change to the more modern Gregorian calendar in line with the rest of the country in 1752. They may also know that this was the last place in the United Kingdom to speak a Norse language, Norn. However, they may not be aware that the reason the language finally died out was because of a pandemic – not Covid-19, but smallpox, lethal waves of which washed over the island in the 18th Century, killing the majority of residents. When Foula was repopulated by English-speaking Shetlanders, Norn was lost.

Many of the words that endure today are names of seabirds. There are maalie (northern fulmars), tystie (guillemots), solan gos (gannets) and many more besides. Above them all, stands the great skua, or bonxie as it's known locally. The huge, brown gull-like birds can be difficult creatures to love.

Even Gear, who has spent most of her life around them, finds their characteristics to be challenging, bordering on disgusting. "The real problem is that fishing boats discarding catch has created an artificially high population, beyond what the natural ecosystem can support," she told me, between bonxie stories too upsetting to repeat here. "Where's that going to end? It's not sustainable." 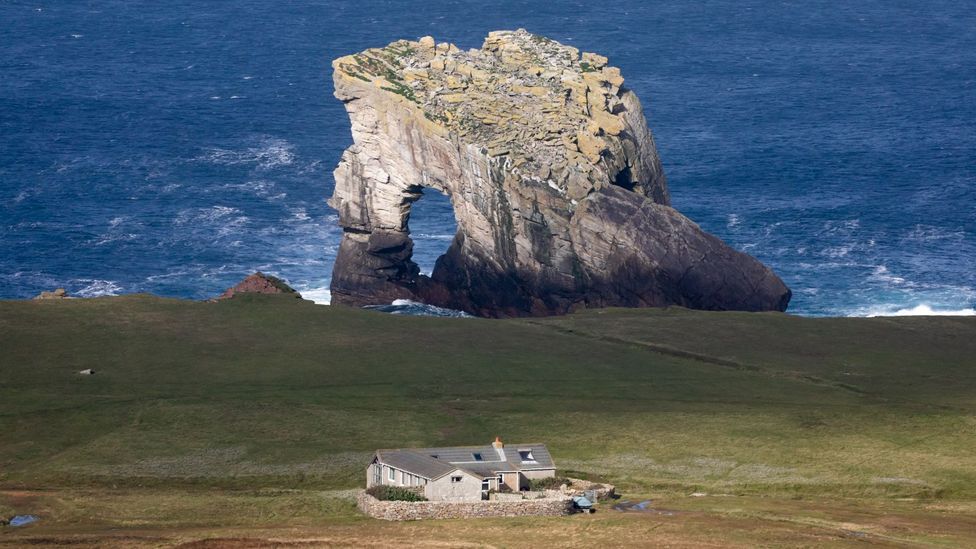 Located in the Shetland archipelago, Foula is the most isolated inhabited island in Britain (Credit: Jamie Lafferty)

The bonxie has no claws with which to kill its prey. It does, however, have the instincts of a predator, meaning it must use its barbed beak to pitilessly peck at its victims. Lambs are not safe, and even Shetland pony foals can be targeted. One night I saw a dead rabbit on the side of Foula's only significant road; by morning, great skuas had disassembled it to something unrecognisable. The smaller Arctic skua (skooty aalin) is hardly a shrinking violet itself, but even it loses chicks to the bonxies. The island's sturdy crows may have larger brains and a reputation for similarly callous behaviour, but they too give way to the piratical bonxies.

Yet even these screaming brigands can't face Foula in winter, instead flying south to Africa to scavenge, rob and kill on a whole new continent before returning in spring. "For all I've said about them," continued Gear, as though trying to strike a conciliatory tone, "we're still really glad to see them come back each time. They're part of life here and we're fond of them, even if we're not so fond of their behaviour."

Birds aside, there is extraordinary beauty on Foula, too. The majority of the settlement is on the east side of the island, sheltering from the most violent of the North Atlantic's furies. Disparate farms are surrounded by peat moss bogs that are dutifully patrolled by mismatching Foula sheep and Shetland ponies. While these scenes can look pretty, especially with the island's satisfying ruddy hills in the background, the north coast is significantly more beautiful.

It's there that Garda stands, a hulking three-pronged sea stack under constant attack from the ocean. The same is true nearby at the sensational Da Kame, the site of most of Foula's birds' nests. They have picked an exceptionally scenic spot; among the highest cliffs in Europe, this vast avian city looks especially dramatic at day's end when the sun's dying rays bounce off its mighty walls as waves crash in below.

The granite landscape does a lot better here than metal – salty gales eat at vehicles, meaning they rarely last more than a few years. Up and down the road, I saw abandoned cars stripped to skeletons by the elements. When I took a walk to the island's graveyard, I found that the same wind had feasted on headstones, leaving most of them unreadable. 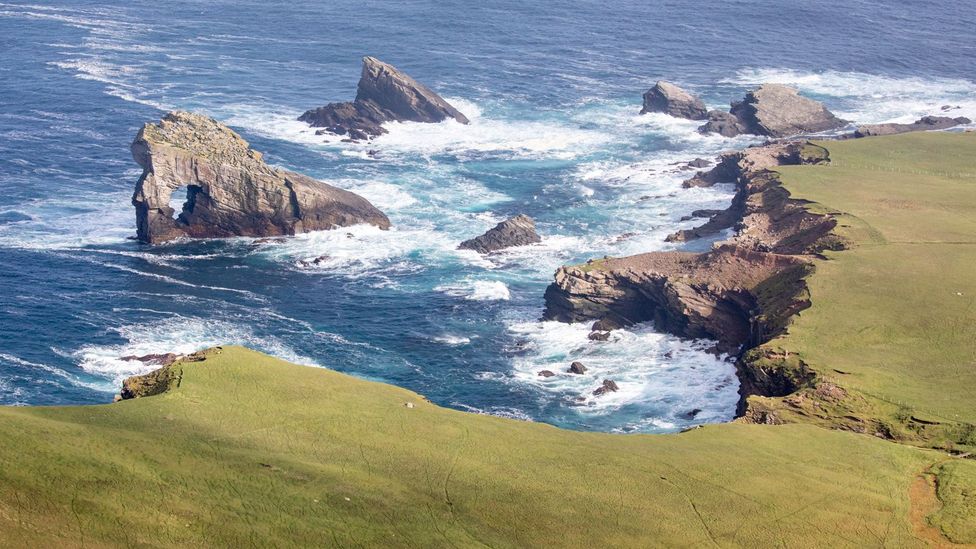 Foula was the last place in the UK to speak a Norse language (Credit: Jamie Lafferty)

I explained to Gear that while I thoroughly enjoyed my time on her island, I had no notion to move there. I would wilt in the face of its challenges. "It can be a difficult place, especially in winter," she replied with a slight chuckle. "There's the darkness and the continual wind and rain. Just going outside can be very difficult, and yet you can grow to miss it. The first time I went abroad was to Madeira and I found myself missing the weather. It was ridiculous."

A hard island for hard people and even harder birds. Magnus Holbourn, owner of the Burns cottage, summed it up on one especially windy morning. "This is not a place where humanity is in the ascendency," he said. "It's just clinging on."

Hidden Britain is a BBC Travel series that uncovers the most wonderful and curious of what Britain has to offer, by exploring quirky customs, feasting on unusual foods and unearthing mysteries from the past and present.

Simply amazing! I love such untouched nature and stunning views. I've been particularly interested in home landscape design lately and recently found a source that proved to be indispensable for this https://antonovich-design.ae/landscape-design.html I hope this will give new colors to my house and make it even greener and more beautiful.