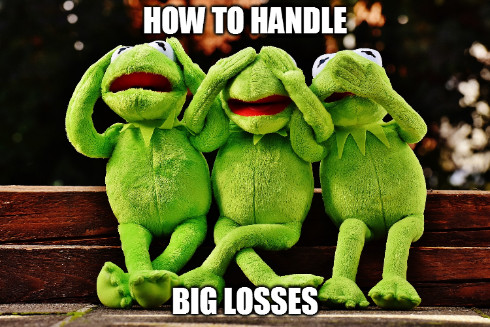 This week I had a significant loss on my account and I thought it would be a great opportunity to write about how I deal with large losses and how to turn it into a positive, constructive and helpful lesson for yourself and your future trading career. It's not something that is talked about frequently enough and I think it's very important to share this information because you will very likely experience a massive loss as well, as all the great traders you've heard, seen or read about have also experienced big losses. I will discuss how I was trading before my big loss, what led to it and what I experienced during the moment and how I dealt with it after.

Every person will have a different approach to handling big losses but here's my way and I hope it helps you in your trading because big losses are actually the greatest opportunities and lessons for us since if we don't make mistakes, we cannot learn and improve.

-The Eye of the Hurricane 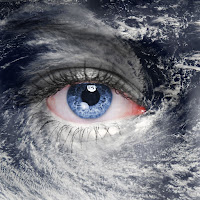 Before March 6th 2017, I was on a winning streak that consisted of 16 back-to-back green days. Since the 7th of February up to March 6th, I had been winning and earning consistently with very few small losses in between. Of the total of 40 trades I had taken, I had only 3 losses. In total I had lost $591 dollars while my average gain per trade was about $507 dollars.

Why am I telling you all this? Because it's very important for you to understand what led to my loss. I will soon describe my state of mind after winning so much and hardly losing because it was what led me to my big loss. I want you to understand my stats and numbers because it had a direct correlation to my performance afterwards.

So just to finish up and give you some more relevant statistics, my winning rate for nearly 4 weeks was 93%. Basically, almost every trade I took was a winner and going my way nearly every time. I know a lot of people who will tell you that’s crap and nonsense; you can't win more than 50% or 70% of the time! Well I can tell you from personal experience and from other traders I know and talk too everyday that yes, you can win 90% of the time or higher, consistently. Anyone who tells you otherwise simply doesn't know what they're talking about. For those of you interested in finding other traders who have won consistently 90%+ of the time, please check out William Delbert Gann (W.D. Gann) as an example.

Now that you know about my success in the markets, let me share with you what that changed in my psyche leading up to my March 6th loss. During the first half of my winning streak, I was trading very well, respecting my risk management to a T and taking trades only in situations that I knew had a high probability of success. I started to develop a scaling in and out strategy which helped me maximize my gross exposure and gains by taking small chunks while the stock was making its moves. As I averaged higher and higher, my overall average would increase as my size increased and I could calmly enter a stock without having to go all in and guessing a top. Even though I almost always nailed the top (as a short seller), I still maintained a very risk averse personality and I only took a trade when I knew things were most likely going to play out in my favor. 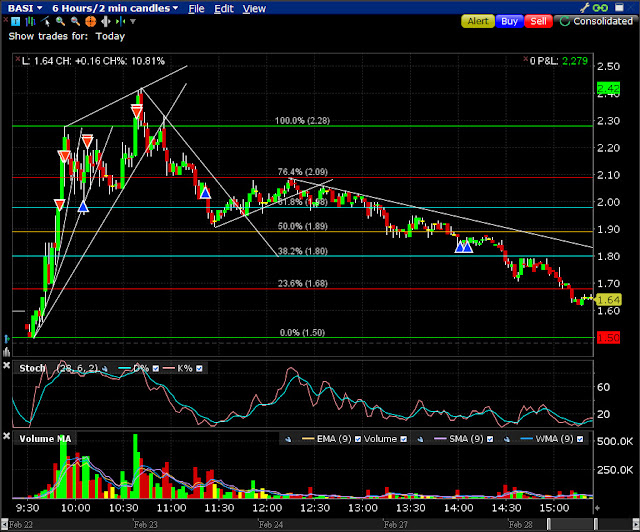 (Here's an example of me scaling in and out of a trade.)

However during the second half of my winning streak, I started to play with higher gross exposure levels and became more "aggressive" in my style of trading. I realized very significant gains during this time and the week before my big loss was actually my highest earning week of the whole year, eclipsing by double anything that I had earned before. I was absolutely dominating the markets and felt like I was on cloud nine and unstoppable. This was the moment where I was susceptible to taking a big loss. I was trading with conviction and every setup that I saw was going go my way. This continued for a little longer...

After my ridiculous gains the week before, I woke up on Monday March 6th feeling dizzy and spaced out, feeling the need to go back to bed. However I had already taken the time to get out of bed and make coffee that I thought I would just power through it and eventually snap out of it.

As I analyzed the market that morning, I saw a few setups I was familiar with and then honed down to one very specific stock by the ticker name of TGTX. It had spiked sharply premarket on news and made a double top at 9.50. Now I knew my setup was in play and I got ready for my opportunity to take a shot if the stock tried to spike a third time. Well, it did spike a third time and I nailed the top exactly and then covered near the lows a few minutes after and made a cool $270 bucks. Nice way to start the morning! Or so I thought...

Moments later, the stock dipped off of the lows that I had covered into and started to climb back up. "What a great opportunity to short again!" I thought. So I started to size in at the same area I had shorted it before, thinking it was going to retest it again and then drop again. Well it didn't. It held the prices I had shorted at and then out of nowhere, a late print showed up and displayed a 5.47 a share price. My PL skyrocketed to over 7.5k and I thought "Man, wouldn't that be nice!”. However because it was simply a late print, it didn't mean anything but it definitely influenced my decision to hold my position. I continued to hold for an hour, the stock not budging lower but not moving any higher. As we approached the final 30mins before the opening bell, the stock suddenly started to climb and test the highs. I figured it would be a great opportunity to add but because I had already taken a full position, I covered some and took a small loss and then start adding and bringing my average higher. This, I thought, would allow me to take a small loss in the short term but come out a big winner in the long run because I was expecting a massive sell off near the open.

(Now just as a side note, notice I wrote "I was expecting" instead of "I was anticipating". I had been winning so much that I was now "expecting" things to go my way, rather then anticipating and being prepared to accept when I'm wrong at any moment in time.) 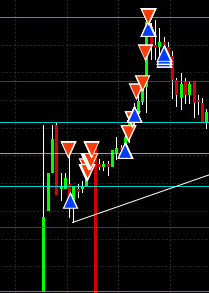 Instead of the stock selling off as I expected, it started to climb. So I shorted some more, going over my normal gross exposure levels. It still kept climbing so I said, “screw it, I'll cover some and bring my average higher...” after all, I knew it was going to crash right!? Well the stock kept climbing and actually started to spike and go parabolic at the open. I shorted some more. The stock continued to make higher highs and now I started to freak out. I became emotional. I was becoming a little hysterical too because I knew in the back of my mind that every parabolic move is followed by a massive sell of... but my PL was so deeply in the red that I couldn't think straight and I decided to cover... at the top. It was dumb and purely emotional at that point but as I was watching the chart, I realized that NOW was my setup and now it was going to cave and go my way, so I shorted again at the very top that I had just covered into. I also realized how stupid I was being and irrational in my choices and decisions. The stock then started to slowly dip but my average was so far from the current market price that I couldn't take it any longer... I couldn't afford any more losses.

I covered everything and realized 2.8k in losses... Ouch.

Well just to make me feel even better about myself, it turns out I had covered right before the stock dropped and cracked right through support. Lucky me! In fact, had I simply cut my losses much earlier, I could have waited patiently for my setup to appear again and then made a cool 20% gain from the top of 11.50's to the intraday lows of 9.50's. 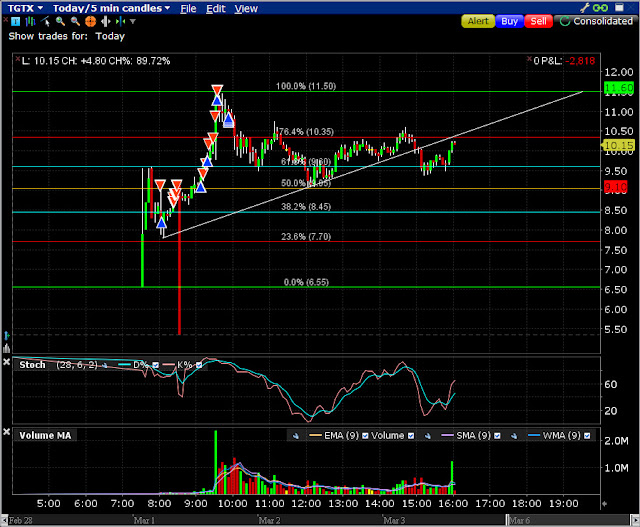 (Here's an image of the entire trade and how it played 'till the end.)

Now mind you, I was devastated emotionally and mentally. Nearly 4 weeks of being right day after day and having put so many hours into my work... I thought of how much better off I would have been had I simply slept in that morning! Well, instead of stepping away from my computer and taking a much needed break, I was desperate to make my money back. I was very angry at myself and I did not want to end the day with a 4 digit loss. So I looked at what else was going on in the markets and saw a random stock spiking. "Great, I'll short this sucker all the way to zero and make back my money!” well, guess what the stock did after I shorted it? That's right, it blew past my entries and I covered at one of the tops again. Now I had lost even more money! You can imagine how much of a moron I felt like at that point. Now I had lost over six thousand dollars and I knew at that point there was nothing I was going to be able to do that day to fix it. 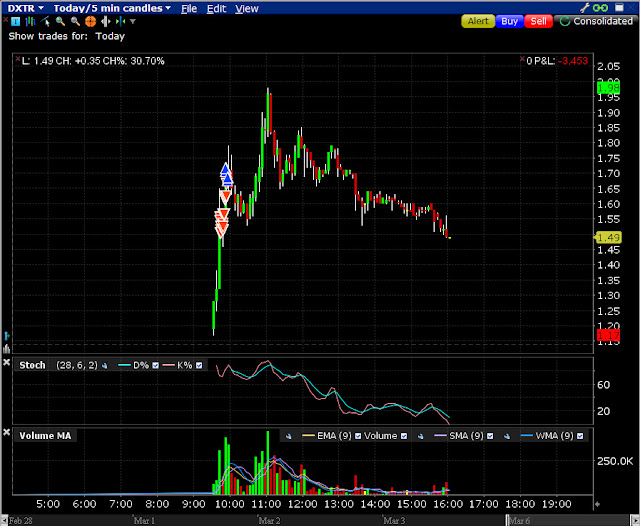 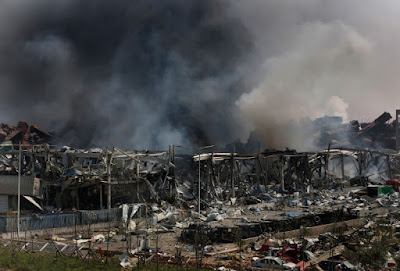 I stopped trading that day and reflected on the series of events that happened before I lost big. I woke up dizzy and fuzzy minded so that did not help with my clarity of thought but something far more important had caused me to lose a lot of money. I had dropped my guard. My risk averse nature and strict discipline to proper risk management had been thrown out of the window that day because I had been winning so often that I forgot I could be wrong. This may sound funny but it's true. I was accustomed to winning so often that almost everything I touched turned to gold. The problem was when I stopped thinking about the risks and stopped abiding by my risk management skills that I had developed over the months that got me to where I am now. One of the biggest lessons I learned from this is to always, and I mean always, be aware that you can be wrong, no matter how often you win. Don't fall into a trance like me where you start to believe that you can't ever lose once you develop a high winning rate. Yes you can lose and it's when you start thinking you're unbeatable that you start dropping your guard. It is also when the market will humble you in ways you wish you hadn't discovered.

-How can you prevent a winning streak from hurting you? 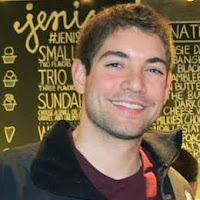 Very well written and informative. Thank you so much for sharing everything. When I first looked at your chart, I did not recognize the ABCD but see it now. Very helpful. Thank you again.

@SFKrystal @friesian @cottage242 @TjRauschmier Thank you so much everyone, appreciate it :)