It's been a while since I posted my trading progress.

In the spirit of @papajohn and others here, I will stay fully transparent and honest about my journey and development as a trader.

What you see above is my current proft.ly profit chart.

It's not really accurate, because in 2017, I traded with a broker that charged quite high commissions per trade and since I could not verify the trades from that broker, my trades from 2017 don't show the results with added commissions (as is the case when importing trades to verify them).

Since mid of April 2018, I trade CFDs with Interactive Brokers to get around PDT and to be able to practice more per week with my live account. So, the last two months also don't show the results with added commissions. (I hope that one day, it will be possible to import and verify CFD trades here as well.)

Anyway, below is my real profit chart. It's taken from my spreadsheet where I track all of my trades in more detail, with the broker commissions added for all trades. 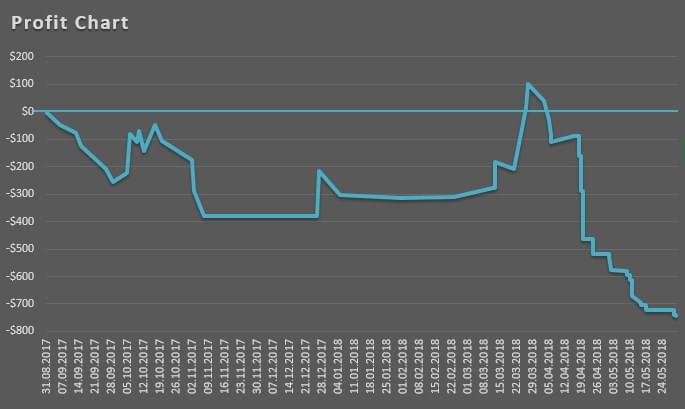 This is an ugly chart, I admit.

And to be honest, I thought that this will not happen to me.

I thought that I will have a smoother and constantly rising profit chart.

I expected to make some losses in the beginning, but certainly thought that once I get back over my zero mark, I would just constantly grow my account with a few small bumps along the way.

I'm not ashamed of this or sorry. Well, I was. But the last few weeks, my mental game improved. (Later more on this.)

Since I started trading last September, I saw a few green months.

In February, I started to trade with Interactive Brokers, which allowed me to reduce my positions to more comfortable size, due to lower commissions.

Here are my trades from March (charts to most of my trades can be found here on profit.ly):

At the end of March, I felt really proud and unstoppable.

I thought that I finally got it and was now a consistently profitable trader.

A big positive influence on my trading at that time had the book "Trading In The Zone", by Mark Douglas. After reading this book, I felt "in the flow" and calm.

I could see myself making 400-800 dollars in April and more in May.

Here are my trades from April: 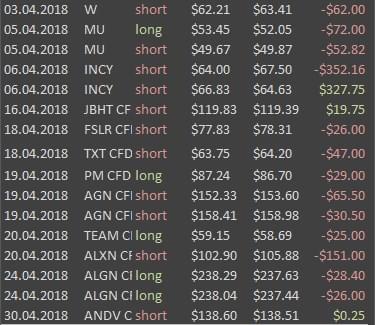 I'm still trying to figure out what happened between March and April.

After the first week of April, I was still okay. Had my biggest loss, but also my biggest win so far.

Then, my red streak really started to happen.

I lost my "flow" and could not see the patterns and entries as accurately and easily as I could in March.

Maybe my new-found "freedom" to trade as much as I want (due to trading CFDs), combined with some euphoria from the successful March, messed me up a little.

Once I realized that this may be a longer red streak, to protect my account, I reduced my positions size from average 100 to average 50, then even more to average 25.

But even with only 25 shares, I still had similarly high losses as I had with 50 or 100 shares. The reason is that I let trades go too far against me, basically setting my stop losses wrongly.

Here are my May trades: 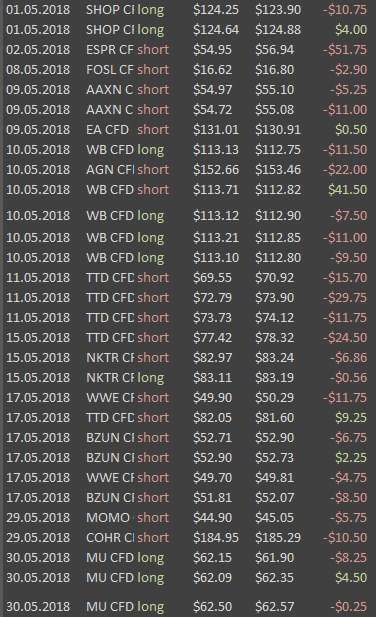 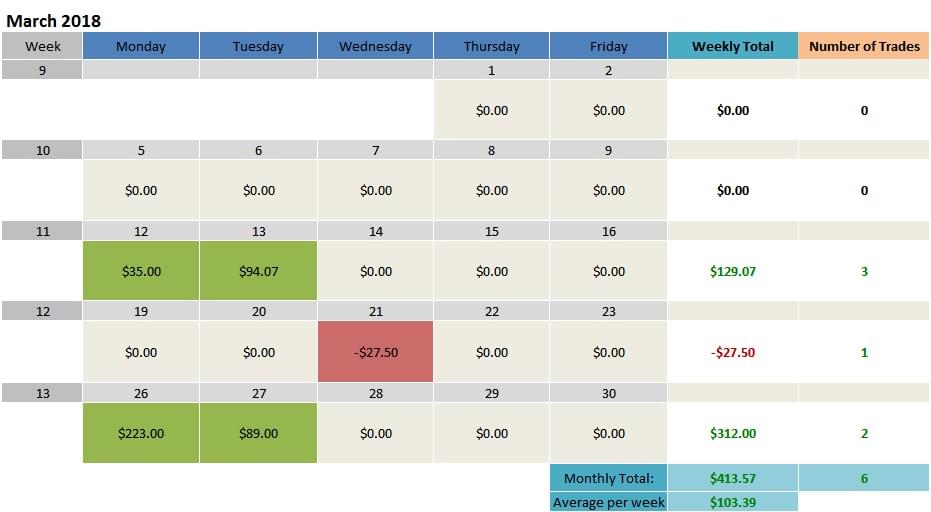 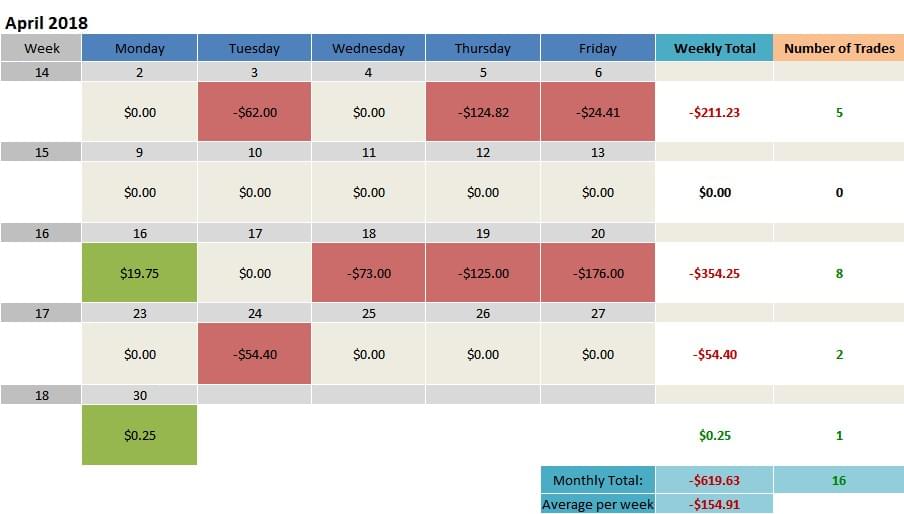 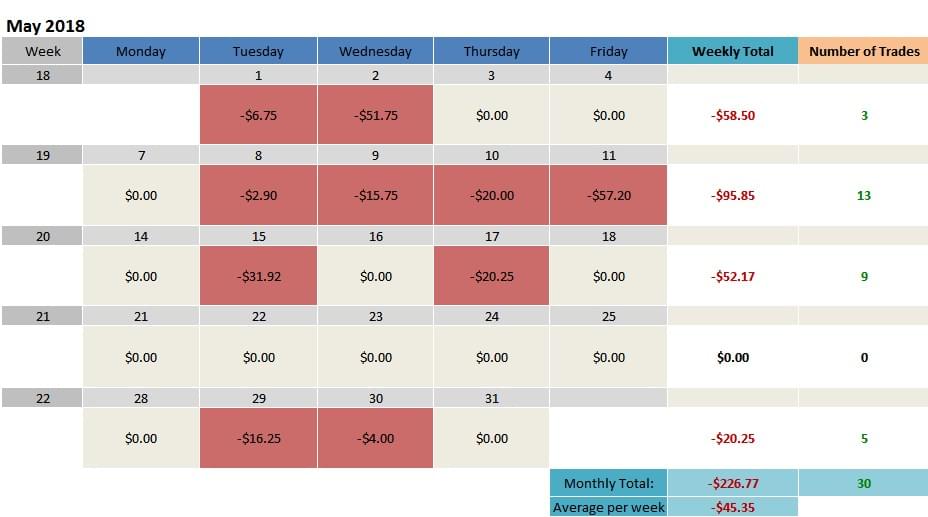 I see a big improvement in the way I trade. I am less hesitant to enter trades and lately always exit at my pre-defined stop levels.

I'm more relaxed when in a trade, which allows me to manage the trades better and be more in-tune with the price action.

My goal for June is to stay as disciplined as I was in May. Keep cutting my losses small and where I planned to cut them.

I still need to improve my entries and stops. This will (hopefully) allow me to be stopped out less frequently and to start seeing more and bigger wins again.

If I can manage that, my winners should erase my losses quickly.

I trade part-time from Germany. That means that most of the time, I can only trade 3 days per week from around 11 a.m. (EST). I also have a small child, which sometimes can be a little bit distracting.

So, when I feel that I'm losing focus, I stop trading for the day. (And enjoy some quality time with my daughter and wife.)

She's not reading this post, but I'm grateful to my wife's support, patience and encouragement.

Trading is demanding and much more difficult than I anticipated when I started.

But I love it!