A case study in support and resistance

I wanted to do a video instead of a written blog post, but I still need to look into good software for making videos (please leave comments about good software for making trading videos). For now, I will write this down because this was an important lesson for me, almost as important as the first major leak I discovered in my trading which I discussed in my first couple blog posts, and actually very related to that leak. So I want to make sure I capture my thoughts while they are fresh in my mind.

The trade I will be discussing was a multi day breakout play I entered on January 10, 2018 in $NHLD. The mistakes I made in this trade were still affecting my trading as recently as the beginning of this week. Let's start with the one year daily chart. This is the first chart I open up for any ticker I want to look at to see if there are any patterns developing which I will be able to take advantage of for profit. 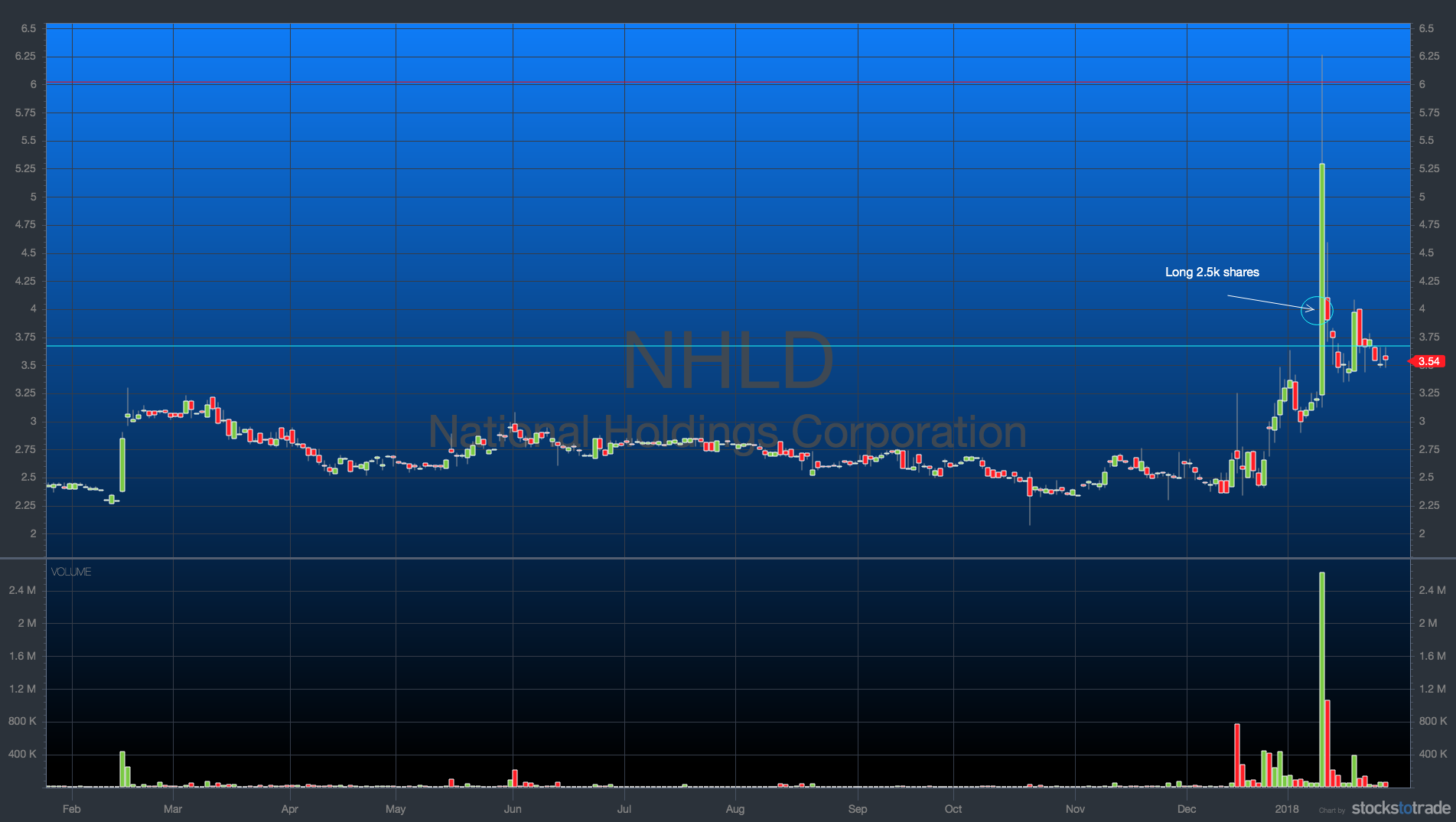 This chart had set up a perfect multi day breakout. This is a clean chart with a recent volume increase and push attempt, then a pullback and some consolidation. The light blue line is the multi day breakout level. On January 1 this stock hit a 52 week high of 3.63 and then pulled back the next day and had a slow grind back up towards that level.

I was watching this ticker and waiting for a breakout to go long. Here is a two day, intraday chart of the day of the breakout and the following day. 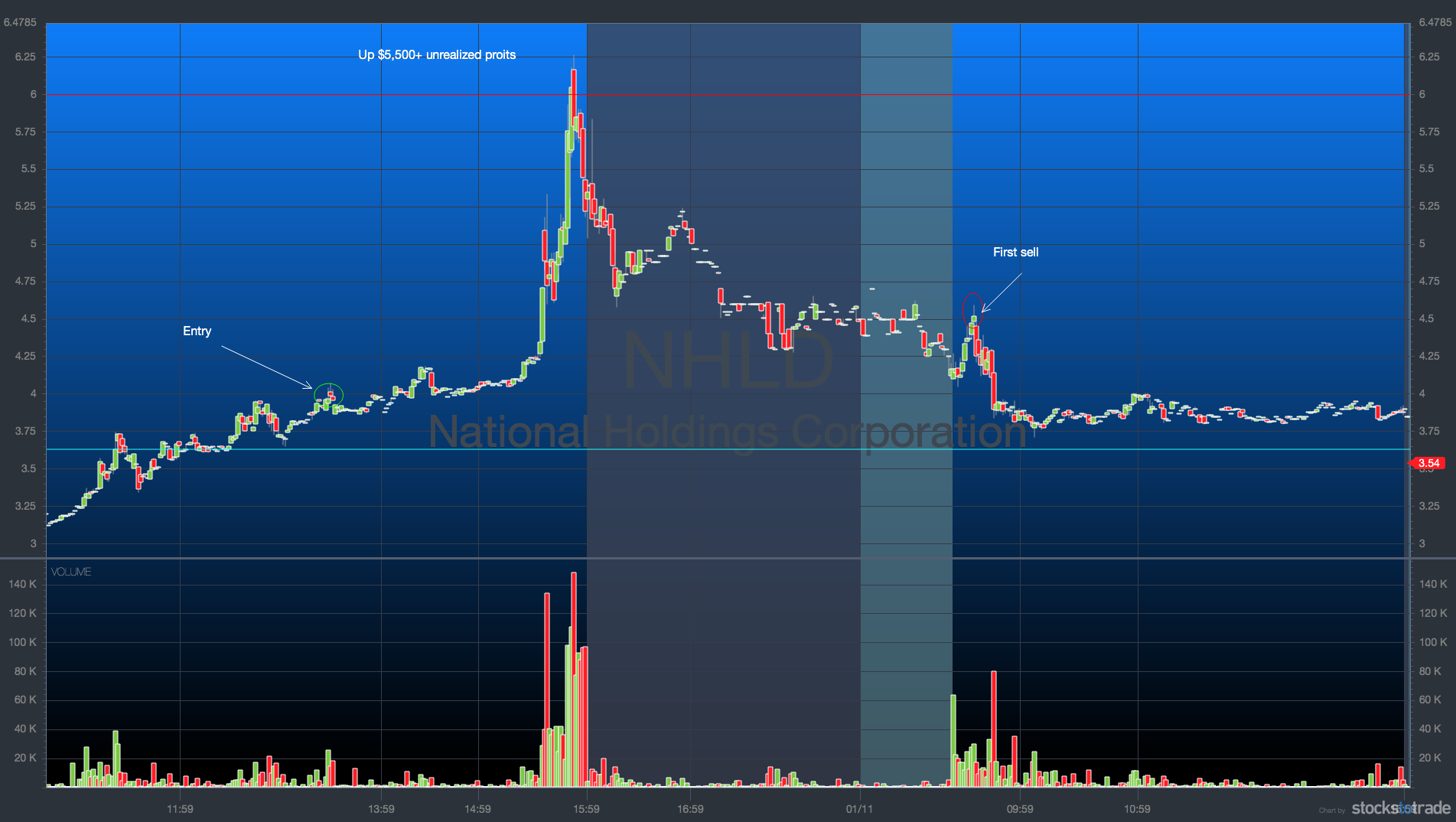 You can see that there was a slow morning spike to right above the breakout level, then a pullback, bounce and some consolidation right at the breakout level. I entered on a HOD break around 1:30 pm eastern for 2,500 shares at a price of 3.98. Before I entered this stock, I checked for any talk about it on twitter. People were saying that they would be coming out with a bitcoin or crypto currency related PR sometime in the near future. So when this spiked all of the sudden at 3:30 eastern I was stoked. Already in at a good price for a possible multi hundred percent runner (as other recent crypto currency plays had done).

The first minute of the spike was so large, it caused a volatility halt for five minutes. I looked on twitter and yahoo, and checked in the challenge chatroom to see if some news had been released by the company, as stockstotrade wasn't showing any news relating to the spike. No news was released, so I took this as a good sign that news was upcoming and I was prepared to hold on for the ride. Before this play I almost always held my entire position the day I bought it anyways, as my plan is almost always to play breakouts as swing plays. This allows me to not use up my day trades under PDT, and save those for when the breakouts fail, so that I can cut losses quickly.

For about 5 minutes, at the top of this afternoon spike, I was up $5,500+ unrealized and over 50% gains. Had I sold my position, it would have been my biggest gains ever, both by percent and by dollar amount. But I thought this still had more room to go, and I had been fantasizing about a $10k+ home-run win on a big position (mistake number 1). This was going to be that play. I considered selling 1,000 shares at these prices for a few minutes. The biggest thing holding me back from locking in at least partial profits was our good friend, the PDT rule (mistake number 2). I had one day trade left and if I sold any of this position, I would be out of day trades for a few days in my Venom/IB account, which is my big account where I can take full size positions. I thought about the opportunity cost of selling for some profits now, and that leading to me not being able to enter future profitable plays over the next couple days. I thought this looked like an extremely strong close, and I would be okay holding the whole position overnight.

Well, until the last two minutes, this was still hanging around in the 5.75 - 5.85 range and still looked like a great close. Then all of the sudden it has a big pullback to the low 5s right into the close. Let's look at the 3 year chart to see why I still felt okay going into the close with this pullback. 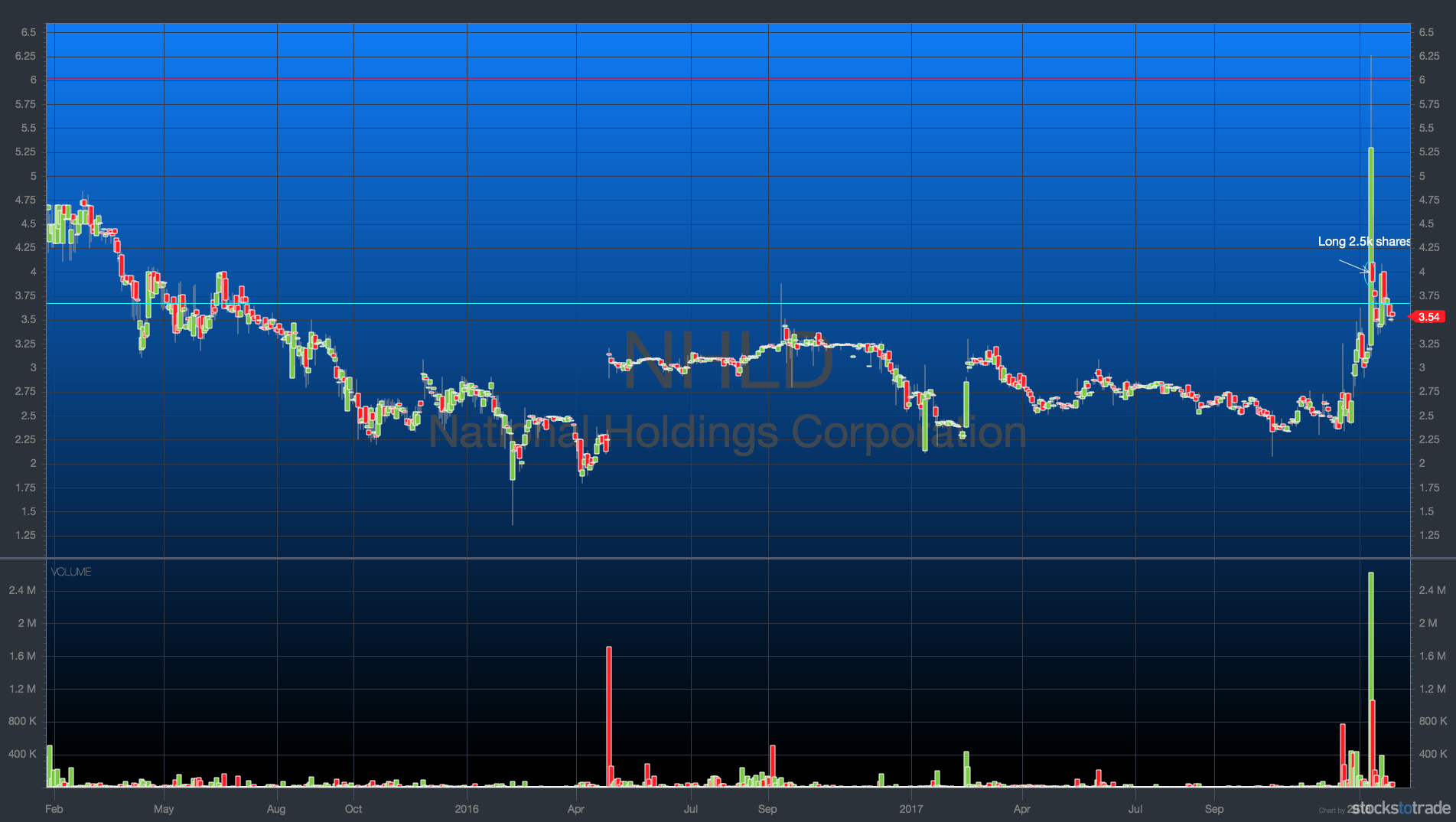 This was still a 3 year breakout at the price it closed at. Up until this trade I rarely gave much thought to resistance older than 3 years. Basically for me, the older the resistance, the less it matters. Although high volume resistance always matters, maybe I got lazy just looking back 3 years for most tickers I played. 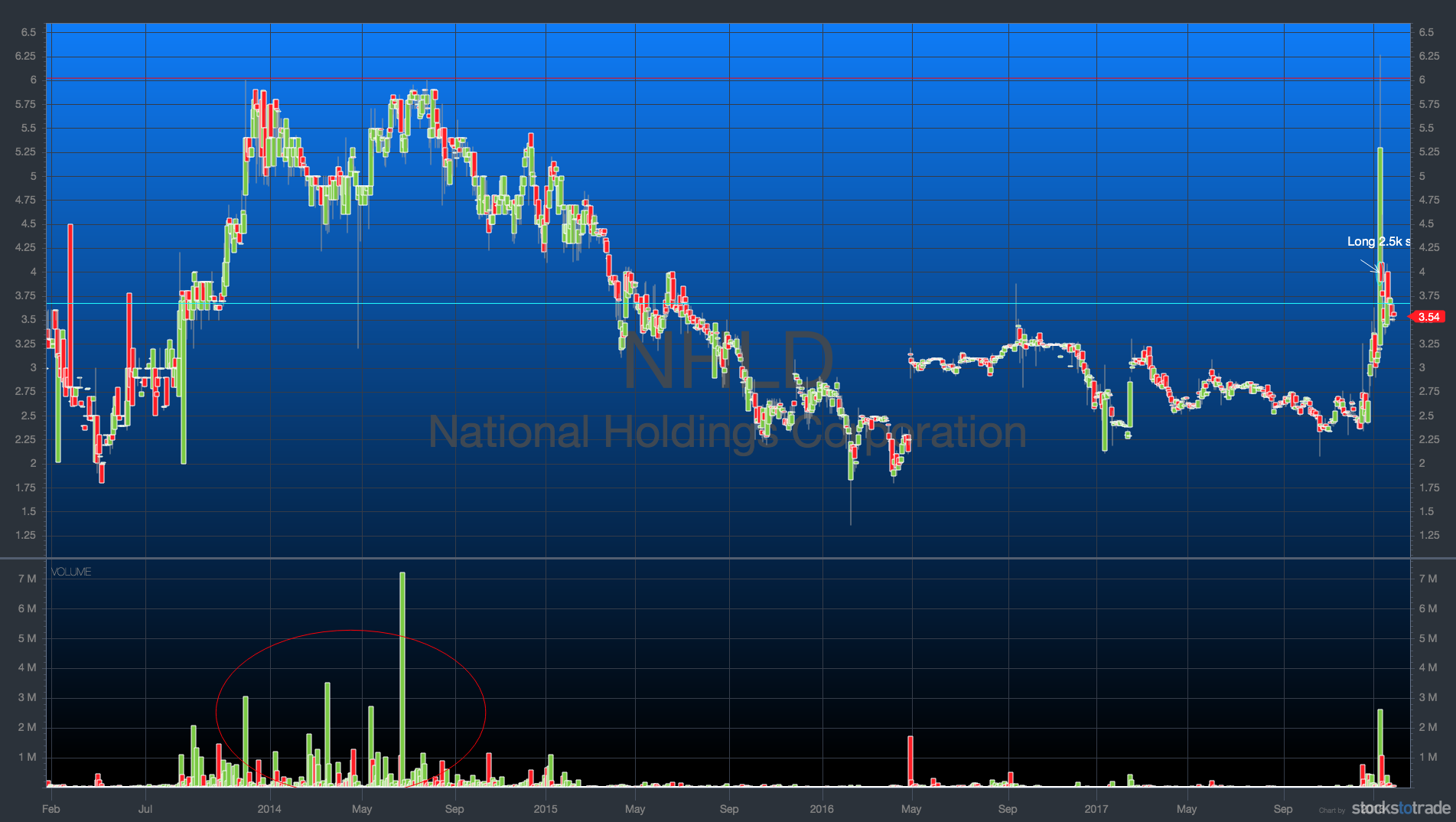 And now you will see what that red line in all of the charts up above represents. You can see clearly from this chart that there is MAJOR resistance at 6.00 from almost all of 2014. There was a ton of volume, as seen in the red oval, relative to the years since then, and much more volume than the recent increase over the last few weeks. Had I looked at this timeframe I would have immediately taken one-half to three-quarters of my position off, and when the spike clearly failed the 6.00 level, I would have exited the trade entirely for somewhere around $5,000 profits and my biggest win by more than two times.

Lets look at the 20 year chart just for completeness. The company isn't quite 20 years old, but is older than 10 years, so this is the chart for the entire life of this company. 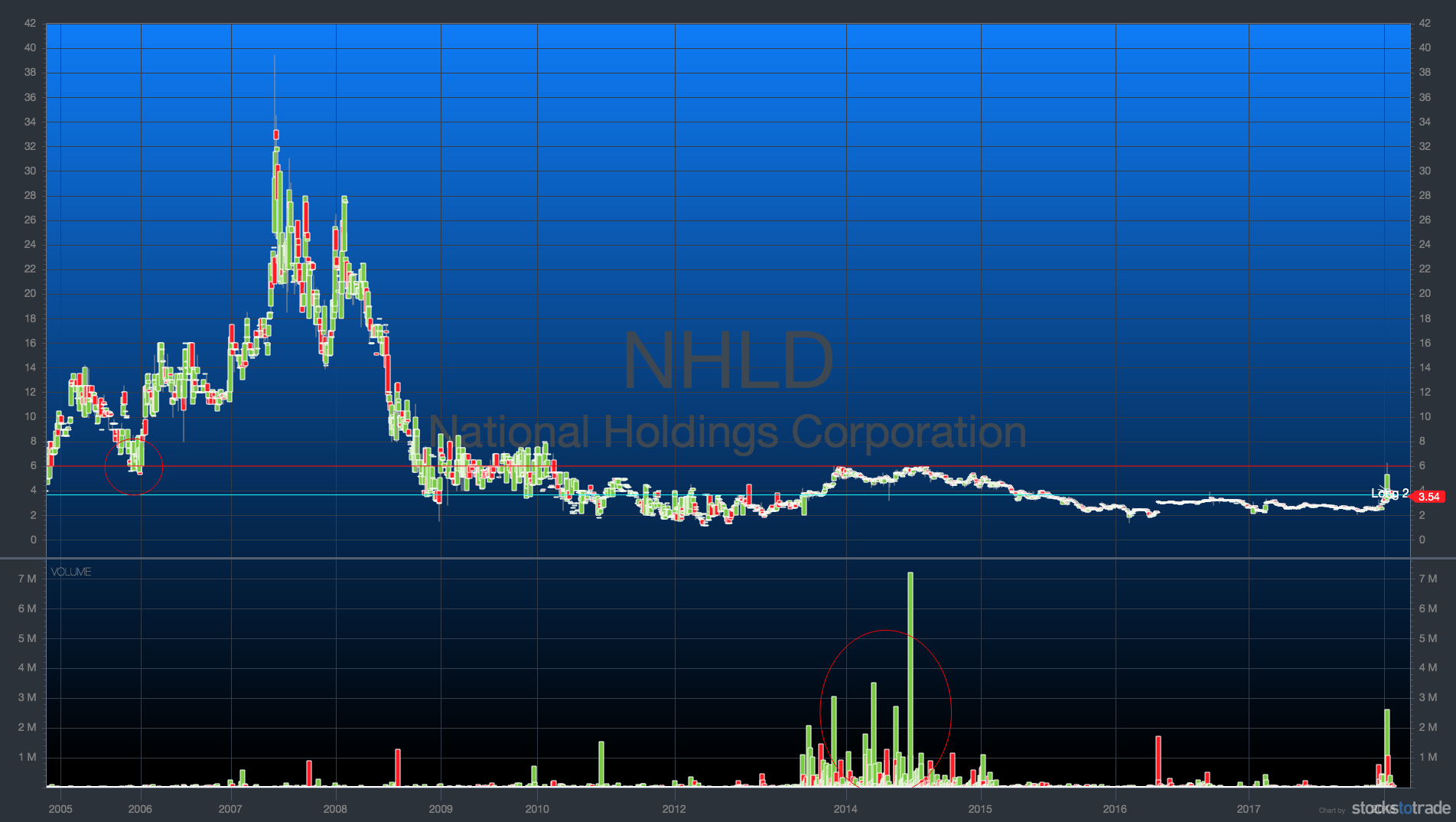 Now you can see that looking back even 5 years is not enough. You MUST ABSOLUTELY look at ALL time frames. The dip in 2006 held at the 6.00 level. This is clearly THE number one, most important, support/resistance level for this ticker. Lesson learned. Always looks at ALL timeframes, just as Tim constantly stresses when people ask him what charts he looks at. Granted, Tim talks a lot, but he is spouting pure gold. Really listen to every single word he says. Use his two decades of experience to your advantage. That is the whole point of having a mentor. Learn from his successes and failures, and all the knowledge he has already acquired which you can now attain at a much quicker timeframe than it took him to learn.

If you trade with a Macbook, Just open QuickTime and click "New Screen Recording" and Boom. Best software out there.

I know this is 2 years old but thank you John ! Looking forward to Tradecaster