A Series of Unfortunate Events

Where do I begin? This has been a rough month for me. I got away from Tim's rules and now I have to pay the price. I took a very speculative position in a play that had a chart I wouldn't normally play, and I decided that it was going to give me what I wanted. But that's not how the market works. The market doesn't care what you want, and you can't force it to give you anything, you can only take what it offers you. I forgot that and it affected my trading for the entire month of February. 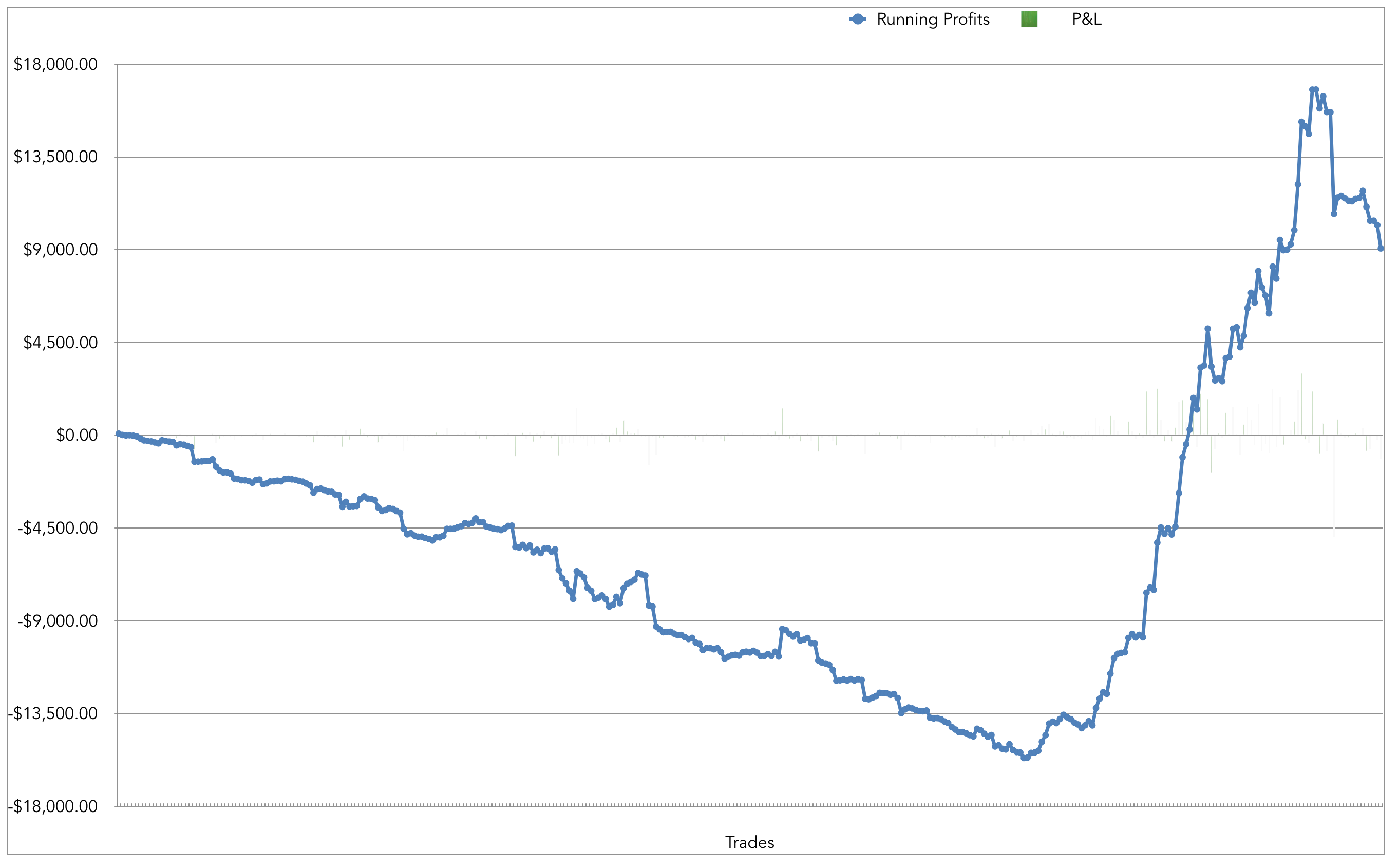 That huge drop was from a trade I took on February 2nd in $VDRM. A true penny stock, I entered just below 2 cents on a breakout over recent highs, and decided based on the chart that it was going to at least test 3 cents. An easy 50% profit on a big position. That was a huge mistake to slip back into the home run mentality. The breakout failed the next day and instead of cutting losses quickly I chose to hold and hope. Don't do that. This was right when the overall markets had their big pullback. I figured that would only temporarily affect the stock and it would be able to regroup and breakout and give me that big win I wanted. When it kept going down instead of cutting losses I added to my position to average down my price. This would have actually worked out for me as far as minimizing losses and letting me get out for what I was initially risking, yet when it finally had a pop weeks later, instead of taking what it would give me, I stubbornly sat as the best offer and only got small partial fills. I still had it in my mind that at worst I was going to accept a breakeven trade, and ideally I was still going to get that big win. 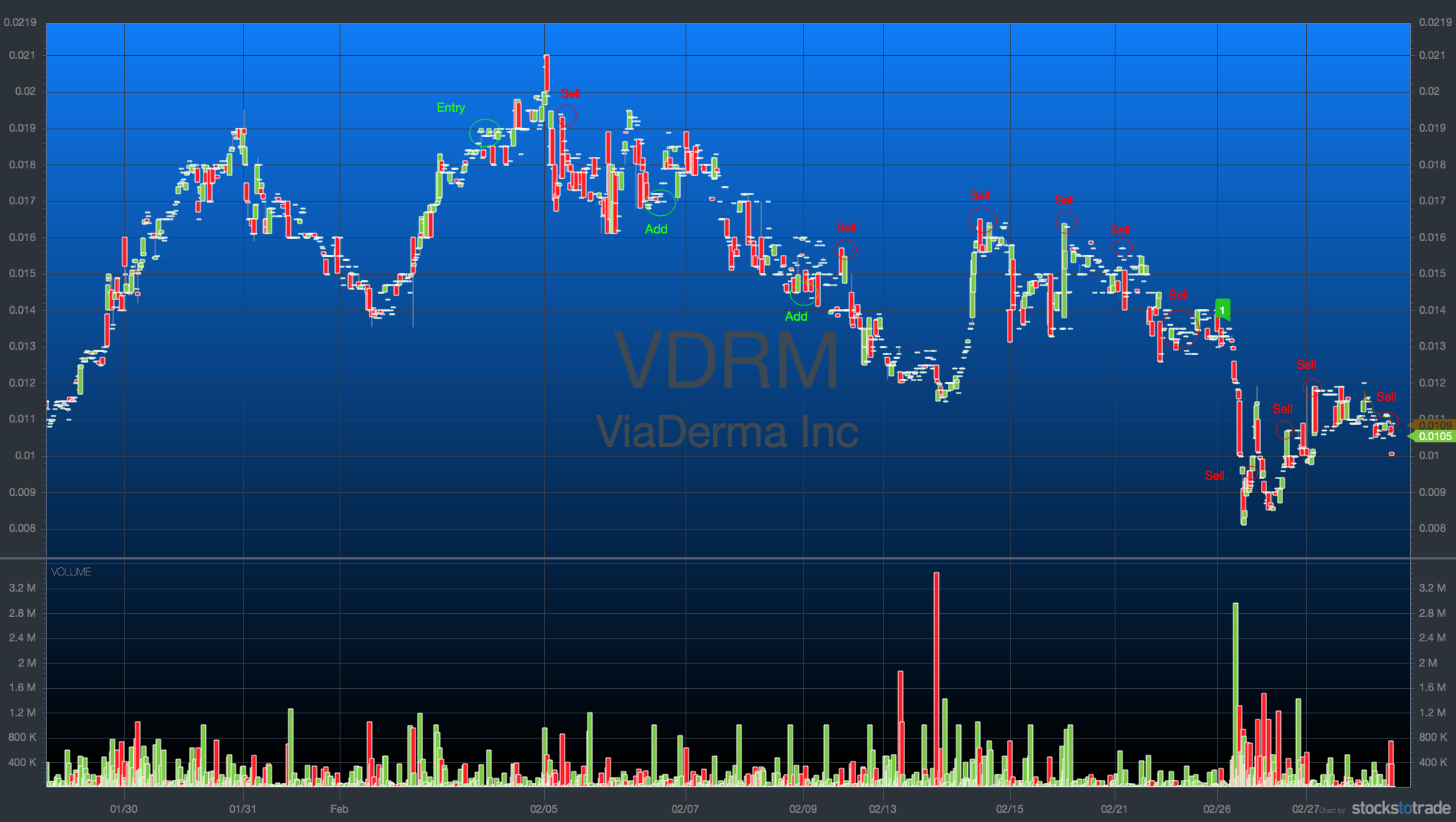 So now I've broken multiple rules. Cut losses quickly. Aim small, miss small. If you are thinking of adding to a position, cut it immediately. Keep losses small. Small wins are okay. Stick to your plan. Hold and hope is not a strategy. All these rules I've accumulated and that I used to go over constantly to keep me on track, I just completely ignored. My position of 1,325,000 shares also became way too big compared to the daily volume. The day I entered it traded 33 million shares, but after that it dropped to between two and five million shares most days. This trade dragged on for the entire month, staring at me with it's ugly chart and big red loss everyday, affecting every other trade I made this month. It made me go full tilt into trying for home runs instead of taking singles. I don't know how many thousand dollar winners I held onto too long, and let turn into losers as I tried to get that big win to make everything okay.

When I was finally going to accept the loss and was trying to still keep it minimal, but was okay with it being a loser, the company files for an offering. I read the filing a few times and was confused about whether it was an offering or something else. The next day the stock tanked again. I considered averaging down more, but not once has adding to a loser ever worked out for me, so at least I didn't do that. I will get back to this trade shortly.

Yesterday I finally had two really good trades, until I botched them both. I had a nice entry in $AKER at 0.685 with 15k shares and uncharacteristically decided to put on a stop limit order on my drive to work in case it tanked on the way. Well I put that order right below my entry instead of putting it down at my risk level. And I got taken out on a very small dip, and then the ticker went on to do exactly what I had expected it to do on my entry and I took a small loss instead of a $1500+ win as it went to test 80 cents. 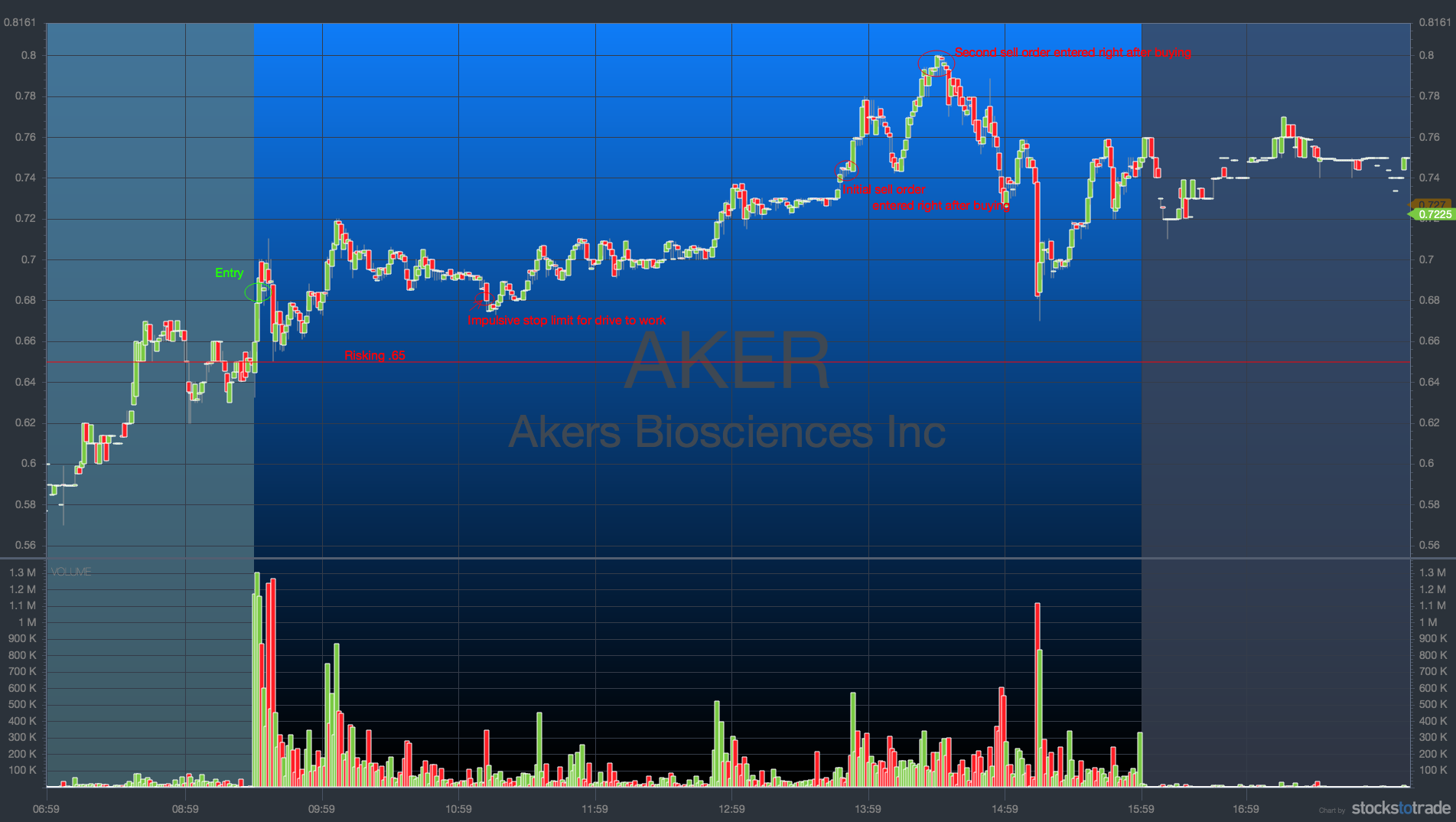 That was messing with my head, but I had also gotten a very good entry in $LDSR with 340k shares at .018. This was nice, but it was only a partial fill, I was trying to go much bigger. I took off a third of my position on the initial spike from the breakout, and when I got to work, I tried to add another 500k shares at .0196. I wasn't getting any fills and right when I decided I would just buy the ask, the stock took off again. It went up to around .024 and I was up over 30% from my initial order, and instead of being happy about that, all I could think about was how I got stopped out of $AKER and how I missed my fills on $LDSR and should have been up so much more. So I stupidly ended up adding near the top when it looked like it was finishing strong and could possibly continue the next day with a blow off top as it was going full supernova. 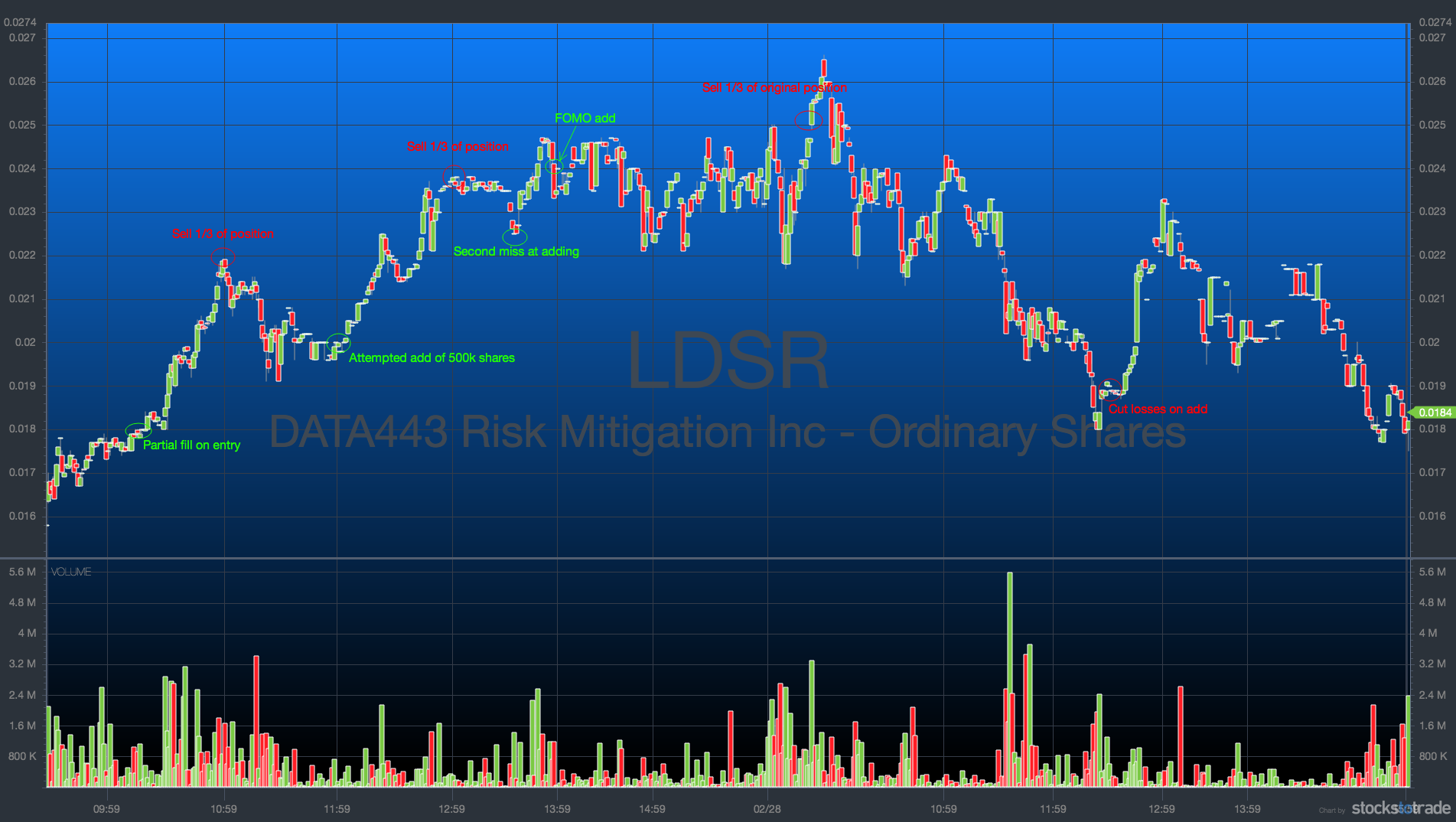 Well it did continue a little bit, and I was up around 10% on my add during the morning spike the next day, but I got greedy. $3000 wasn't enough to make up for all my mistakes this month. I wanted more. But of course the market didn't care. The stock pulled back and went sideways for an hour or two, giving me plenty of time to still lock in $1000 - $1500. But now I wanted that $3000 that had been offered, at the very least. Well it has a panic and I end up cutting losses around minus $1000.

Right after I cut that one, I went ahead and cut the last 400k shares I still had of $VDRM out of a total of 1.325M shares I had accumulated throughout the trade. That loss is nearly $5000. My biggest loss yet. It hurts, but it is a 20% loss on the position size, and I used to take much larger losses when I was still learning what I was doing. My average win now is 16% so in the grand scheme of things, it wasn't that big of a loss, it just ended up being a huge position due to my adds.

I made one mistake after the other all month. Luckily I only entered into 15 trades this month which maybe helped minimize the losses I was taking as I was breaking all of my rules. So I end the month down around $8.7k. A fairly large amount in itself, but I had a nice three day streak in January where I made more than that on just 3 trades. So not a huge setback to the account, just a small setback to my confidence and a good smack in the face to remind me to follow my trading rules.

Where do I go from here? Back to basics. Focus on what I did to turn around my losses in the first place and give me the success I attained recently. First and foremost, cut losses quickly. I'm still up $25k from my low point over the past 3 months. And I'm only 10 months into the journey and still have a lot to learn. I needed to get this all out of my head so I can focus and move forward. Onward and upward. There is a long way to go and decades of trading ahead of me. I will learn as much as I can from these mistakes so as to minimize the chance of this reoccurring in the future. Thanks for reading.

Wow, I love the detailed information here...Thank you and you will make the money back plus plus ;)

@Clovis yep for sure. I already have. I’m at new all time highs now.

Awesome! I just need to turn my chart around like you did...lol

trust me when I say be patient, I learn that I was overtrading just to trade, I was making charts to look like I wanted them to look and not allow the truth to be told. I spent about 100hrs just watch the tim video's and just stop trading. I also sold all my stock at a neg or maybe a small gain, but mostly at a neg. Hard to see that money go down the drain. Study and find your style. most of all do not follow or chase the chat rooms picks. 99.9% of the time they ae in the stock that they mentio