You are using an outdated browser. This site may not function properly with it. For a better experience, please upgrade to a modern browser here.
HQGE
Trades 1,043
View Profit Chart
Blog Post
Watchlist
Video

Here I am 3 months later. Sorry for not updating on said positions from my previous post- I should have some cliffs notes on the ticker in my trade log. I have exited all of the positions I previously mentioned except for $HQGE. Why you ask? Because some part of me seems to think it will someday spike again on a promo. On the 3 year weekly chart, it went as high as 0.2 in 2018. I'd really just like to see it spike back to break-even for me, but who knows when that will happen or if it will ever happen. Years leading up to 2018, it seems there would be a small spike in the chart towards the end / near the beginning of a new year, but looks to be in sucks-ville since then. Maybe I'll hold through the end of the year and maintain a GTC sell limit order. I've liquidated most of my other positions so I have some capital to play with. But I'm "stuck holding the bag" on $HQGE until I decide that I care about the money I have tied up in it. As far as BTSC goes, I thought it might come back when bitcoin heated up again, but it didn't. I cut my losses slowly on BTSC and it cost me more for breaking the cut losses QUICKLY rule. See a trend here? I've fighting with myself on cutting losses. I'm trying to train myself to just cut the losses and move on. The more stubborn I am, the more money I lose. If I were to "cut losses quickly" and "take profits on the way up" I would be making bank. It's not about the quantity of the trade, it's about the quality of the trade. Don't jump into trades just because you're itching to be in a trade. If it's that bad, paper trade until you can tame yourself...or don't and just lose your real money..sometimes that's the best way to learn, as long as it doesn't blow up your account, because that is mentally devastating. What am I saying? Just cut losses quickly. If you're watching your trade go south in real time falling through support levels, it's time to just get out and move on or call it quits for the day. Better luck next time. It's a game of the mind.

$HQGE needs to take out day high at .0095 to have a shot at going Supernova since its the lowest priced education play I see

Exit comments: Weak breakout over day high at .0095, no thanks, small gain, staying safe in this choppy market, but. glad to play the hot education niche, will still watch this one to see if it can hold/extend gains, singles add up

Not bad in this market

Set my alerts, didn't want to chase, have had that problem lately with FOMO!

I wanted to just give an update on some trades. I mentioned I was holding $HQGE, and I still am. I'm half-expecting it to get a lot of attention sometime soon, but I'm growing impatient. I'm also still holding BTSC, since Bitcoin has been hot, I'm hoping for a spike there to exit break-even or close to it. I'm also holding TSNPD. Holding VBHI, but REALLY just need to cut and exit it also. I held TSNPD through the first symbol change, and if I had done what we've been taught (take profits along the way), I would have had a pretty nice gain on TSNPD. Now I'm sitting on a big unrealized loss, but I am hoping the planned name change to HMBL will spike it again, and I can exit with at least a small profit. Now...here is something very valuable I've learned in this whole "holding and hoping" process: YOUR CAPITAL IS TIED UP. I've got 38k in my account tied up in various trades and long-term positions (not part of day trading). Since I'm holding these large sized positons, I HAVE BARELY ANY CAPITAL to trade with. I had to exit some of my investment positions earlier today JUST SO I COULD TRADE with any size worth trading with. So I have learned a big lesson. You can hold and hope if you want, and it may come back, it may not. But you WILL BE CUTTING YOUR CHANCES AT MAKING LARGER, PROFITABLE TRADES, if you hold and hope. I have been struggling with my pride and not cutting losses when they break support levels (multiple ones, too), but now I realize that I'm only crippling my ability to trade, in addition to taking big losses. So keep that in mind when you start to think, "I'll just hold on because it 'should' come back up..." and then you're left holding a bag with no capital to trade with until you exit with your bigger loss.

Making millions, managing a community and keeping his students in check, probably all out of his bed .... what a legend.

Thank you for a another great webinar.

It is fascinating to see someone with 20 years of experience navigate so smoothly through what is for me unknown territory. So many hidden lessons.

@timothysykes I promise to trust the process. I understand it's not about picks. This is so good to be able to see and hear your comments as the stock market adjusts. Thank you for all your time.

very beneficial getting to see live trades in real time, not trading yet just growing my knowledge account. Thanks Tim

$VPER INND $HQGE INKW SING all former runners coming back, I have the runt of the litter

Entry comments: The one former runner that hasn't run much yet, only got 1/3 of the size I wanted as its spiking fast, thx to whoever brought it up in chat, goal is to make 10-20%

Exit comments: Breakout over previous high was weakkkk, no thanks, VPER, INND, ENZC, OZSC better all day runners, so I'll take a small gain and not overtsay, maybe playing too safely, but I'm in the mode f protect, protect, protect

You are literally amazing at this

So, a few weeks ago I was a bit conflicted in my trading. I posted on February 19th 2021 that I was long $HQGE and $LTNC, knowing that they are being promoted. I didn't know what to expect, but I knew that I was down on both positions. I couldn't ignore how much attention $LTNC was getting on twitter, and how it was continually being hyped like it was going out of style. I decided to continue holding, thinking, "Maybe these promoters are right...maybe it is going to the moon (and I'll get out when it does)." I got sucked into the hype on the possibility of massively increasing my account size with a single trade....a 'home run.' Thank God that Tim repeatedly mentioned $LTNC throughout the weekend and how it was a pump & dump, and it wasn't until Sunday evening it finally clicked that I was getting sucked in. I watched "How To Trade OTCs Safely Now That The SEC Is Halting Plays Galore - https://profit.ly/content/premium/21821" and read these tweets from his commentary: "https://profit.ly/user/timothysykes?id=2888795 ."; After these, the light bulb just came on and I realized something super important. Even "IF" these promoted stocks were to go to the moon, or just one of them, that is NOT sustainable gains. So what, you hit it big ONE TIME and you profit big. When those gains are gone, what do you have to show for it? Nothing. What we are learning here is how to make consistent gains that will sustain us continuously. A one-time home run (if you're lucky) will last you for a short while, but not forever. So forget the hype, try to catch the promotion early, and sell when they hype it up. I was very fortunate to get into $LTNC before the height of the pump. In fact, I was watching Level 2 this morning when it kept climbing and climbing. I noticed a LOT of big sellers..millions and millions and millions of shares being sold...Why? The stock was trending upward at pretty steady pace. It just didn't make sense to me. Then I saw a few million on the buy, and I started to think, "Maybe this is a shadow game they're playing to help mask the selloff." It dropped from .045 down to .04, and I decided that was my risk. I had 200k shares several weeks ago when I initially posted about $LTNC, and I sold 100k, which covered my entry price. I sold the 100k shares I had left in the .040-.041 range this morning, and it was history after that. $LTNC had a huge red day closing at .0172, down from the high of .045 today. I'm very happy that I was watching Level 2 this morning and noticed all the shares being sold off, otherwise I would be sitting at a MASSIVE loss instead of the nice gains I picked up during the promotion. In retrospect, it's much more worth taking singles and making small gains over time. It's nerve racking at times having your hard earned capital being controlled by sneaky promoters and crooked companies that do everything they can to make themselves look legit...even going as far as getting NFL players and other media-worthy individuals to take a photo with them, or make a single tweet about their company, or anything that would otherwise cause thousands of people to fall for their scheme. They are very good at what they do, but it's really not worth the risk unless you absolutely know without a doubt where they are in the promotion, but then you have to worry about SEC halting them! Just take singles and sell into strength. Cut losses quickly, its safer, and the reward is much greater in the long run. As for $HQGE, I still have shares here. I was thinking it might be running along with $LTNC because they seem to be promoted together. $HQGE is getting nowhere near the amount of attention that $LTNC was getting. I've already made enough with $LTNC to cover my losses on $HQGE, so I'm going to hold just a little longer to see if the focus gets shifted to $HQGE, but I've had a Good Till Cancelled order in on it for quite some time at .03 just to exit if it spikes again. Doesn't look to be spiking at all right now. Tim made a comment earlier that leads me to believe the pump on that one is already over, so I'm going to look into it a little more and may just take the big loss on it instead of holding.. To be determined.. BUT, the lesson here is that these companies will never go "TO THE MOON" or mars, or wherever their CEO and promoters keep saying it's going. Watch the video lesson and read the tweets I linked to above as Tim so elegantly explains this. I'll be posting my LTNC trades tomorrow when I can verify it and upload from TD. I'll also include a chart showing my entry and exits. 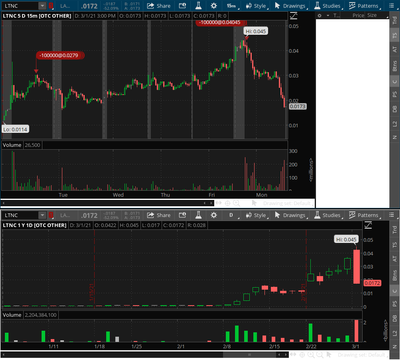