FNBC, bad sushi example, went down from the $2s to like 0.25 cents. Why? The news was saying something about being taken off of the Nasdaq 600 Small Cap List because they didn't file financial paperwork - I think. Then it starts to go up today. It was the top percent gainer when I was looking at it. Would love some explanation on why it's up- is it a pump? Is this what happens after a bad sushi fall? So I was paper trading and the green arrows are where I got in. At one point I was up $300 because it went up .30 cents on 1000 shares. Then it got halted. That's the first picture. Then when it came back, it was already significantly down so I sold at a lower price. Then got in for another 7 cent ride up but got out when I saw it wasn't gapping up anymore. In retrospect I should have taken the profit earlier but I was curious to see what patience would result in. @Timothysykes I think it would be great if the tabs can turn red too when a stock is halted, so you know the status of the halt if you are looking at other stocks and that particular window is closed. Do halts generally last 5 minutes before restarting? 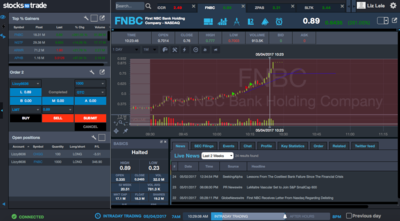 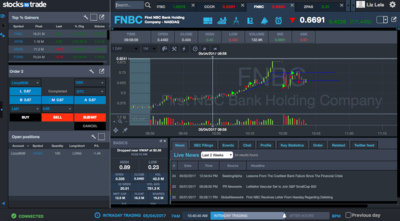 Or, I guess they can be as long as 10, but theyre generally 5

You look at several time frames and mark what makes sense

Pretty much. Plus the more history there is to that level the more confident you can be it will behave like you expect it to.

It can even be years. Generally, wherever there is a point in a historical chart, it's considered a level.

@Nathan_casey but what time frames? if each time frame has something different, how do I understand what the support/resistance would be?

Did you consider your commissions and fees? That's a major thing to consider in your profit target. Especially with small share sizes.

And yes, ScrawnyB has a point too. Are you considering the buying power multiple? 731 sounds about right to be down margin-wise for a that amount of a loss minus commissions and fees.

From videos i watched says if i have buying power x4 this means i could buy 400 shares with same anount of 731$ even if initial deposit is lower than 500$, do i got it right?

But here i bought 100 shares x4 times overpriced and this confuses me.

Have you looked in to SureTrader?

You can short stocks that have dropped more than 10% as long as you place your limit above the bid. Wasnt sure if you were aware of that.

Ahh okay, so that's the only limitation?

Yeah, so basically the price has to uptick when you sell the shares short. It is still a major limitation on shortselling, but it doesnt eliminate it entirely.

You cannot short sell with robinhood. You can tap order type in the top right corner to place a limit order (though the app places market orders as limit orders 5% above/below the buy/ask)