Back to studying and paper trading for a little bit.

Shitty Story #2: All in the span of a day. One of the pitfalls of a small account is that it's realllly easy to get yourself into a 90 day freeze from a free-ride. I picked my very first overnight hold (NXTTF). It wasn't a perfect pick, but it performed better than I had originally anticipated and I played it exactly as planned the following morning where I was going to sell immediately upon market open. That's a good thing too because it promptly crashed a few minutes later. I thought I was sitting pretty until I pressed sell, where I received a notification that if I sold, I would be put on a 90 day freeze... so there I sit with a fucking conundrum. Sell for $200 profit on an $800 investment and freeze my account, or call customer service. I did the stupid thing and tried calling customer service where I was put on hold. Instead of selling for a $200 profit, I sold for a $200 loss and I'm pretty sure my account is frozen anyway. Also, I made the same mistake as yesterday... I thought I sold 1000 shares only to find out 5 minutes later that I only typed in 10. That mistake accounts for the majority of the $200. A lot of learning going on here. Staying positive.

So.... here's a shitty story. I bought 500 shares of TEUM at the day's high today and it definitely didn't do anything I thought it would do. I sucked it up and sold for a 0.10 loss which I was pretty pissed about. I tried to cut losses sooner actually but I'm not exactly Quick Draw McGraw. To make matters worse... I sold 300 shares. Yup.... I bought 500.... and I only sold 300 while the stock tanked the rest of the day. I didn't realize that I hadn't sold all my shares until after hours. Then I tried making my very first after-hours trade, only to find out I hadn't signed an extended hours agreement. A customer service call proceeded and I got it all fixed. I was lucky enough to not have any huge losses, but man that was a train wreck.

Halfway through disk 10 of htmm and digging through technical analysis for dummies. 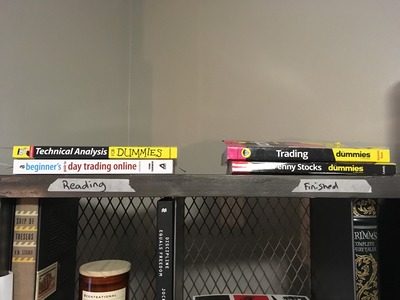 I made my first few trades this week and used StockstoTrade to help me find good candidates. I didn't become a millionaire, but I learned 1) how to buy and sell 2) Timing is incredibly important 3) Level 2 Quotes could've helped a lot 4) you need to trade more than $500 if you want to avoid losing on commissions 5) How to screen for stocks 6) I can find the right stocks to trade on my own before Tim posts them or they show up on twitter 7) 52 week highs are a great indicator 8) Steven Dux and Roland Wolf are both great teachers 9) Studying pays off, and 10) I need to keep studying harder than everyone else.

Made it through disk 7 and halfway through 8 today. Also watched my first market open. Really educational. I hope all this pays off.

A little before bed reading from Trading For Dummies. Learned about spotting breakouts, the teacup pattern, and the double bottom pattern. Also watched a couple how-to videos from stocks to trade. Tomorrow I have a long drive and plan to absorb a few hours of knowledge from HTMM.

Made it through disk 6 of HTMM today. 1 disk a day keeps the poor house away. Also reading a chapter per day of various dummies guides to trading.

@BloodHalv Hey there, I saw that you are spending some time just studying right now and mentioned you'll start trading in the spring. I'm doing the same and I was wondering how it's going for you? I'm curious if you are going to try and join the Challenge at some point, get a silver subscription, or buy each DVD individually to continue learning. I'm pretty undecided myself and trying to evaluate what my best option is. What are your thoughts?

It's going pretty good to be honest. Thankfully I have a lot of patience personally so am willing to wait this long. As for the study method, I will be getting later this month as I feel it will be advantageous. For the DVDs I would suggest Trading Tickers. HTMM is good but perhaps a little outdated now.

Steven Dux is releasing a new DVD soon and I am interested in buying that. I feel DVD's are good study methods as the content tends to me more structured and thoughout. So if you haven't done anything yet, look at HTMM (it's on sale and is a good foundation) plus Trading Tickers.