View Trades
This user has no followers.

What would make my trading day a success today, even if I don't make money? I will ask myself this question everyday before market open. I think asking myself this question forces me to think about process goals and not profit goals. This brings on a very healthy mindset.

Daily Recap - What a difference proper risk management makes. Only made 5 trades today on 4 different stocks. second trade on OCGN I shouldn't have taken cuz I looked at it like a b/o and it is a FGD bounce play. my trade on NMRD was a bit of a chase into strength as well and super choppy so I should not have made that one. But I think I had my best trade to date on GGII. I saw in premarket gapping up close to the B/O level and thought that if it ramps up in the morning to get closer if not to the b/o level, a quick profit would be there or see if it holds during mid day and be ready for the afternoon HOD test. When it was having good volume and ramping up I got in early since it gave me a clear risk level not too far away and took a smaller size position. Was able to move my risk up throughout the midday during the consolidation and I did not get scared at all. I sold half when the b/o past .04 was looking a bit weak and then the other half at .0414 when it was looking weak again. I did sell only because I was scared about giving gains back but still was a very very good trade for me. I finally feel like I am on the right track now. Today I saw the results of the right risk management. And I had my first green day where I kept my gains and stayed away from chasing a bunch of garbage. I am also finding it much easier to find B/O's when I am only looking for that setup and not multiple setups. So for now B/O's is my only setup. My $59 today will $590 soon, I will continue to make myself better at risk management and entry and exits on B/O's. I will look to continue this trend when I get back from work late next week

Daily Recap - I haven't traded much if at all the last couple of weeks. I have been focusing on getting better at risk management. I have been very frustrated after every day of trading because of lots of little losses and scratches. After one of Marks webinars where he talked about risk management I realized I was doing it completely wrong. I was taking $500 to $1000 positions and risking $50 at what ever price level that $50 total worked out to. This resulted in me being to scared to hold though any small pullback or dip because it was close to or already below my risk level making me hesitant to enter any trade, frustrated when I did enter and have my risk hit exit and have the stock go on with out me. So I've just been practicing risk management on plays that I wanted to be in and see how it plays out. Today was very good for me even though I had a bigger loss because I wasn't paying attention and another bigger loss getting trapped in a halt down on LEDS, my goal to cut my loss at my risk was there I just need to pay attention. I also know now how quick and randomly a low float can drop. The main b/o play I was watching PJET didn't work out but it had a nice set-up and I had the right position size for my $50 risk and I let it ride out until it stopped me out. It was a very good trade for me because on another play similar to PJET today, I will be there for it actually pushing and setting new highs in the afternoon, I will be there when the trade is working in my favour and not getting in and out 10 times with bad entry and bad risk levels like how I used to. SO MUCH learned the last little while. THE PROFITABILITY IS COMING. I AM GETTING BETTER EVERYDAY

Daily Recap - So today I did some good things and some bad things. Bad: I tried to force trades after I finally caught the bottom of a dip on LTNC, my first successful dip buy on a morning panic. Unfortunately it was a fake bounce and continued lower and then I struggled to get and when I did it was the real bottom. Im getting much better at seeing the turn, but I saw why its important to wait for panics that fall 20% or more, you get a better chance of catching the bottom and if there is a fake out it usually happens somewhere in that first 20% of the panic according to the data that I've tracked. After this I was just so desperate to try and get a win I was trying to short VXRT that was having a 2nd green day and was not extended and was very choppy. On the good side I traded to my own plan on UXIN, after it spiked in the morning and had a pullback I bought the low when it looked like it was holding and made a higher low. Since it had a good daily chart, good volume and a good catalyst that it would consolidate, grind up and then breakout past the highs. my thesis was right and worked back up through mid day and afternoon. But, once it did breakout and everything was working and the trend was still intact even though it dipped a little bit after the breakout, I was so scared about losing my unrealized profit that I just exited. Even though the big picture was still intact. But, I am proud that I made a plan and stuck to it even though every little dip just made me want to get out and cut my loss. Today I started reading The Daily Trading Coach and I definitely think it is helping. It was a frustrating day for me but it was a good day, I learned a lot.

Daily Recap - Lack of discipline today with revenge trading. Learning that I am really not good at holding stocks for long periods of time. So stuck on the small picture and not thinking about the big picture at all. Every little red candle scares the hell out of me and so I exit even though the stock is still working in my favour or has not reached my risk level. Still feel like I have no idea what I am doing sometimes. I feel like the chatrooms are distracting me leading my focus to other plays and not really finding what works best for me. Another frustrating day that's for sure

Daily Recap - Today was another solid day for me. Had great discipline and only made a four trades today not including my o/n hold. The OTC market picked up a little bit today and there were several FGD OTC's. A lot of OTC's spiked but I'm still to nervous to buy them early in the day to hold. Today I made my first successful dip buy and it was a mid day dip buy. it was everything I could do to hold it when was trying to bounce. So much fear of it turning around on me. Hoping there are some more good morning panics that I can try tomorrow. Ended the day with $120 profit. Not much but what's important to me is I had some small gains and kept them. I didn't give it all back with chasing more stupid garbage plays. Great day for me

Daily Recap - A lot less FOMO today and better discipline. Made fewer trades which means I was trading less garbage setups that just cost me money. Lesson learned today is the longer a stock panics or breaks down, can mean a slow and drawn out bounce. Right now in this market bounces seem to have more fakeouts before the actual bounce so don't jump in on the first bounce attempt all the time. And have a little more patience when it is starting to bounce. Today RECAF and HMBL level 2 battled a bit before it started to really lift. All in all it was a good day for me

Daily Recap- Tons of FOMO today. Chasing strength and chasing alerts in the chat. It is quite obvious that I am not good at longing stocks in this market. All of my wins are from shorting and breaking news alerts if I catch them early enough. I really want to get better at dip buying because there is good opportunity for it even in this market but, from now on until the market changes I am going to focus on shorting good setups and being ready for breaking news plays. I will also continue to work on dip buying but I think I need to record some level 2 action before I just keep chewing myself up with commissions. I made 14 trades today... that is unacceptable for right now. I should be making maybe 4 or 5 if that.

Daily Recap for yesterday and today- So yesterday was an awful day, chasing anything that looked like it was going up I was buying or going down I was trying to short it. Chasing strength and weakness and not even paying attention to the framework. Actually up until today id say that I've completely ignored the framework, just trying to play charts that look bullish or bearish and trying to force anything. For the last few days I've probably made 10+ trades every day and with the state of the market I SHOULD NOT be. Today was sooo much better even though I only made $38. I finished green on the day and I only made 3 trades, only one of them I entered where I shouldn't have, LTNC I chased strength trying to get in for the b/o and it failed, the right entry was a pullback right before the b/o attempt. But, what a difference today was from the other days. Last night knowing that I couldnt keep trading like yesterday, I watched Marianas March recap on YouTube, that gave me an aha moment. Then I also signed up for Breakouts and Breakdowns with Jack and Kyle and read recent chat log for about 4 hours. I got even more aha's and I really like the chat room, less noise than the challenge chat and they are more interactive with questions during the day since I think there are far less people in the chatroom. Just by being in the chat room for 1 day already saved me $100+ on commissions and accumulating small losses. %100 worth the money 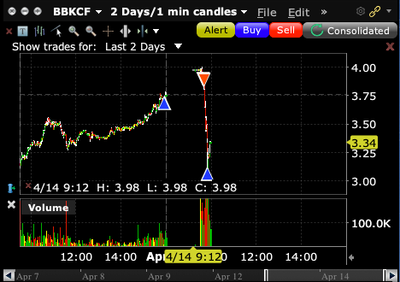