You are using an outdated browser. This site may not function properly with it. For a better experience, please upgrade to a modern browser here.
CYTR
Trades 2,603
View Profit Chart
Blog Post
Watchlist
Video

Today I again had some stupid mistakes, but I made some little learning breaktrough aswell. I've had a (20%) 200$ @ $0.85 short position on $CYTR since yesterday, held it trough today safely because I was protected by a wall of sellers @ $0.80. Sold all before close @ $0.79 for a $14.10 profit. It was a good trade but I will scratch it because today I decided to stop shorting, since this is something that I can't do before I'm well profitable, so why bother cluttering my area of focus. My other trade was a MTBC BO that I prepared to catch on MO, only to miss it because I (the idiot) chased a lead to a predictably much less likely $ASNA BO (which I (...the idiot)didnt know because I didn't research that stock).... I researched MTBC.... which I missed. And why? I think you know the answer to that question. Anyway, because $ASNA was such a shockingly bad trade, I was stunned and missed like 3-4 sniper bounce plays also. And why? I think you know the answer to that question too. Nevertheless, I didnt want this to ruin my trading day so I calmed myself and decided to stalk another opportunity Rambo style. Caught MTBC's second breakout as it was coming back from the dip strong. I locked in some nice profits along the way but I failed to protect my gains and let my winner run a bit more freely. Wielding with total 300$ (30%) of my imagined budget like an agressive samurai I managed to lock in several toupes (scalp profit) and 1 better traded meat of the move, resulting in 34.82$ profit. Both plays wound up well but I was not happy with my discipline, and I chose to stop short biased trading untill further notice. Overall 49.92$ gain on overall 500$ dollars used. Could have been A LOT better, and also I did like 7+ trades so the trading fee would probably eat my whole profit if it were not Monopoly money. Very nice progress in statistics, some lessons learned, some points taken. Looking forward to tommorow! #nodaysoff :D P.S. No pics today because my IB paper account was only 1000$ so they told me I'd be breaking PDT. Wrote down my entries and exits and only took them into consideration when the tick would come on my order number after input. Also, IB platform is 15min delay, so I dont use my browser at all during market hours.

Today I lost the only trade I made MO/intraday but I couldn't be more proud of myself. :D I tried my best to follow advices given to me so I kept the list simple and my focus narrow. Of the top few potential Dumps, RETC fell the first and hardest. I tried to dip buy it half way down at signs of changing trend but it changed back very fast. By some miracle I kept my composure when I saw the lvl1 action, bought to cover really fast, 0.02c lower. I kept the thesis intact and continued to wait until a more clear bottom. Once it bottomed I bought some and sold 2hrs later into The Crow pattern few cents lower again. Today I also started using IB paper trading platform so I am making technical advances aswell. I put in a paper short of $CYTR @ $0.86 to give overnight tactics a try, the stock should follow its previous after spike pattern and gap down nicely. All in all, 5% loss today but I'll take it as a false negative :P 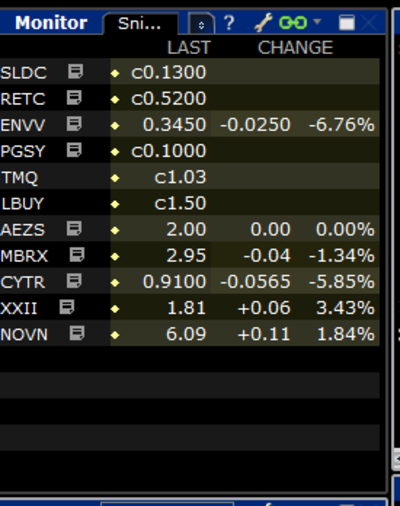 Paper trade of $CYTR- 7500 shares. Stock was below $1. Used the first day high as an indicator. Bought in four times to increase position size. That was a bit excessive though. Used 15 min estimated average to guide me in the trend. Waited for a break out past the established day high. $180 profit. Cha Ching Corresponding video: 7 mins long https://youtu.be/4sf4Qo6j2A8 Took profits before it had a pull back. In the pics below you can see the break out over the day high, the climb and the pull back. For anyone doubting their abilities out there in terms of studying ( which I often do) I present you with this video. Learning is not fixed, it is based on effort. https://youtu.be/H14bBuluwB8 Another Video from Angela Lee Duckworth on What is Grit: https://youtu.be/Rkoe1e2KZJs

Why did the stock jump up on the 28th July? I can't find any indicators that suggested it would jump up, and with it's volume dropping the day before I would have thought it would tank instead. Can someone teach me what am I missing at?

Why was CYTR jumping on July 28? Sometimes there aren't any indicators. I'm not sure tho.

Thank you Mark Peace Out VOLUME IS CRITICAL!!

Volume is Critical. Thanks Mark

Tim your podcast was great, always inspired by your spirit and your generosity. I'll listen to it many times for inspiration, and looking forward to meeting you in Orlando soon.

CYTR, It was on my watch list when it supernova last time. Straight out from penny stocking part duex. I bought, sold, re-bought and sold. Making $10 and $17 each trade. I could've hold but I trade cowardly and trying to create good habits. Even though commission eaten my profits I still walk away $3. LOL. I'm super happy I witness these plays, learning and building my knowledge account. Leaning how to trade is FN tuff! Thank you, TIM!

Small green day on XTNT. 750 shares in 0.69 out 0.73. Good entry, junky exit, learned a couple lessons on execution. But, every little win helps for my small account. Thanks for everything, Tim!!!

I had LINU @ 41 the day before, before anything cause i thought it was going to spike that day and then sold it for a a sent or two more to get rid of it cause it wasn't moving and man what a mistake!!!... I'm learning, Thanks @timothysykes Also I wanna add that i work 12 Hours a day 5 Days a Week! AND! I made an extra $100 today on a bathroom break and sold it on lunch break @noon # :D

Thank you Mark Peace Out