You are using an outdated browser. This site may not function properly with it. For a better experience, please upgrade to a modern browser here.
SHIP
Trades 811
View Profit Chart
Blog Post
Watchlist
Video

($148.00) loss $SHIP Long I was right on but Greed was on top of my head. Did not trade with the chart, was fantasizing to go up like yesterdays $TOPS. Wrong execution. First bought pre-market, 1000 @ 1.64. I miss the first peak(did not encode the price I want it sold) it was on to the price i had in mind (@1.80). Second round, pre-market still, going up I was right on my price but i played HOPING to get thru 1.70. I enjoyed watching the Level 2 with the big sellers at 1.69. Then I miss a agin selling. Then, the market opened, it did not spike as I expected. bought 1000 @ 1.45 to bring down average so i can get out / Sell Intelligently. But, Greed and HOPE, came to play again. Wanting to sell it @1.70 it might go up with the big volume. Then, change to 1.65, to 1.60, to 1.57, -- then i became IMPATIENT worrying of the earning result wont help later in the afternoon. then finally i sold it @ 1.47. My stress finally gone -- the after i sold the price went to 1.60 as as wrote this. Big lesson learned. Greed and Hope is not part of the game. This should stick to my mind now, Watch again the videos with TIM. -- Nice videos TIM, thanks. Lesson well learned if you experience it (at least not on big amount) -- better if you can avoid it.

So if I make mistakes, I'm all about learning from them, I technically took my first loss on a week this week, due to a stupid trade early on with $SHIP and I immediately realized that losses like this were turning into a trend. I was telling myself it was part of my education, and it was needed to learn how to get better at going long. I'm glad I woke up because the losses were starting to add up. The attached picture is going on my board and will be an integral part of how I approach going long in the future. Fortunately I'm up $300 thanks to the China Sector going bonkers today and wins on HTGM and DFFN which got close to me breaking even but I'm still holding short on $CCCL and on $CYCC 's rediculous rise Thursday. 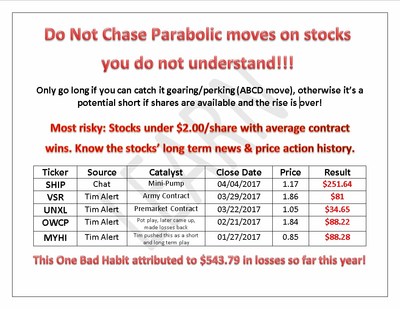 [SuperAlerts] $SHIP being early paying off

[TimAlerts] shipping sector looks like it may be bullish this morning... $SHIP up p/m no news I see other than sympathy ... $ESEA news and up